While the evenings were filled with concerts, the days were filled with activities. There were trivia games, bingo, morning prayer, workshops, exercise classes, in addition to the ships amenities such as the rock climbing wall, gym, game room, pool, casino, etc.. Traci and I did not overdo it when it came to trying to participate in the activities. I enjoyed a trivia game one day and Traci won a Soduku contest.

However, fitness activities were a different story. Traci worked out every day whether running miles on the treadmill, taking exercise classes, or doing her favorite workout DVDs in our cabin (she brought them along with her portable DVD player - dedication!). I normally don't workout on vacation but on this cruise, I actually did - twice! I attended the Tae Bo class led by Bridget Smith on the pool deck. Even though I've done Tae Bo many times in the past at home using Traci's extensive workout video collection, this class kicked my butt! I was sore for two days. I participated in the class later that week to redeem myself.

There were activities on the cruise that encouraged passenger-celebrity interaction such as meet-and-greet sessions and the passenger choir competition led by Kurt Carr. The Yolanda Adams Morning Show was broadcasted live from the ship each day at 6 AM (5 AM the first day because of the time difference). Traci and I somehow managed to attend the 5 AM show the first morning after having just gotten in the bed at 1 AM following the previous evening's gospel concert. I had never listened to the morning show at home but the live broadcast was interactive and fun. There were giveaways and even a short workout segment led by Yolanda on one of the commercial breaks. 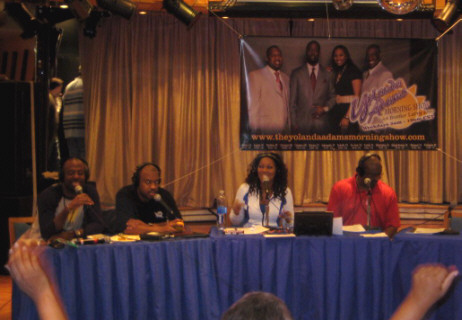 One thing I truly love about this cruise is the people we meet. Traci and I ate almost all our meals in the dining room where the waiters provide first-rate service. There are no assigned tables in the dining room on this cruise. Instead the host/hostess seats you with other guests. This usually meant we were meeting new people during every meal. All of these encounters were positive. Everyone we met was so down-to-earth and easy to get along with. We got along so well that there were times that the waiters thought we all knew each other.

We met a lady who lives in walking distance from our house. We met a fellow Hampton alum. We dined with many Radio One employees. One morning we ended up having breakfast with the NFL Moms. When they found out Traci and I were from the Philadelphia area, they told us stories of how they were harassed by Philly fans for wearing their sons' jerseys into the stadium.

One of my most unexpected meetings was after a Tae Bo class. As I high-fived the lady next to me, she asked if I was from Philly and had a wife name Traci who is a Delta. I answered yes and began to feel embarrassed because the lady remembered so much about Traci and me but she did not look familiar. She then told us she and her husband had dined with Traci and me once during the One Love Gospel Cruise in 2006. Wow! I was impressed that she had such a good memory. Her husband did not come on the cruise this time so she was there with one of her friends. Traci and I later hung out with her and got caught up over pizza.

The majority of the passengers on this cruise seemed to be middle-aged and older. The women greatly out-numbered the men. Many of the women we met seemed to be doing a women's getaway vacation. Regardless of the demographic, I always felt like I was part of a big family on this cruise.

Each night was a different theme night: Represent Night, Formal Night, International Night, White Night, and Jazzy Jeans Night. For Represent Night, Traci intended to wear her marathon shirt and I intended to wear my Philadelphia t-shirt but Tampa was just too cold on the day of our departure. We participated in the other theme nights except International Night. We did not see many people dressed up for International Night. Although Traci brought a dress with her for White Night, she ended up wearing a dress she got a great deal on during our stop in Mexico. 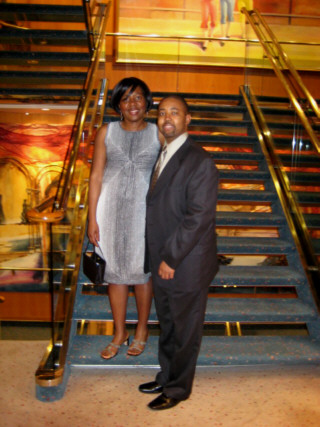 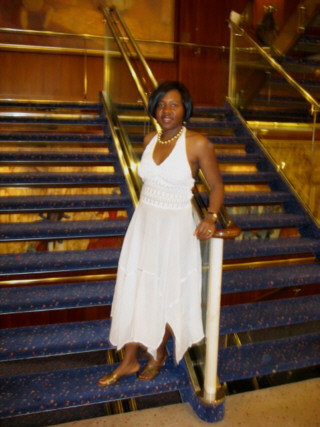 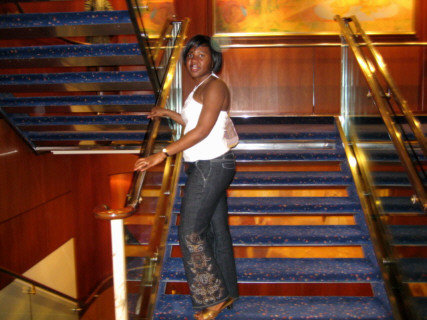 Belize City was our first port of call. We were scheduled to be there from 9 AM until midnight; however, since our ship left 3 hours late to give those affected by the east coast winter storm a chance to make the cruise, we arrived in Belize at noon. I could understand this but I was not sure why the ship moved its departure from Belize to 7:30 PM. Anyway, as a result, the shore excursion I really wanted to do (Jungle Walk & Cave Tubing) was cancelled. In fact, all the jungle excursions were cancelled. We found out about the cancellations the night before we arrived in Belize. Therefore, I went to the ship's purser's office where they gave me a refund and allowed us to sign up for a different shore excursion. Traci and I decided to sign up for the Tale of Two Cities tour.

The port at Belize City is too shallow to accommodate large cruise ships like the Grandeur of the Seas; therefore, our ship, along with two others, was anchored at sea and passengers had to be tendered ashore. It was a 20-minute boat ride to the port.

Once ashore, we walked through the pastel-colored shopping area and to the army of shore excursion buses that were waiting on the street. We were then driven through the city where our guide, a former history professor, pointed out important monuments and buildings. The city looks rather raw and run-down in some places. Belize is very marshy. We rode by a neighborhood where many of the homes are sinking and leaning. Other than Greenland, Belize is the only place I've visited where you won't find any fast food chains. We were told Subway tried to open a restaurant several years ago but had to close because it was unable to make a profit. 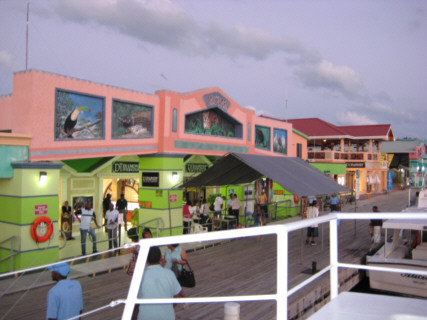 One of the interesting landmarks we saw was the Marion Jones Sports Complex which is named after the fallen track star. Marion's mother is from Belize.

Belize is the only English-speaking nation in Central America. It was formally known as British Honduras. We happened to be in the city during a local election day. The schools were closed and people were out in red or blue to support their candidate.

As we headed out of the city, the scenery became very rural. The landscape was green and marshy with swamps and occasionally some rustic homes and churches. I had a pleasant surprise as we crossed a small bridge. I happened to look down and spot a manatee swimming lazily in the water.

It was approximately a 45-minute ride to our destination, the Mayan ruins of Altun Ha. I remember learning about ancient Mayan civilizations in elementary school. Altun Ha was my first Mayan ruins visit. It did not disappoint.

After allowing us to take advantage of the restrooms beside the parking lot, our guide gathered us together, handed out bottled water, and began explaining the site. We saw the large stone structures that date back as far as 200 BC. The Mayans would build atop their old temples every 52 years. Archaeologists believe that as many as 10,000 people lived in Altun Ha during its peak years from 200 to 900 AD. The population dwindled after the 12th century and the jungle began to reclaim many of the ancient buildings. Excavation of Altun Ha began in 1965. We saw hills that cover the Mayan structures that have not yet been excavated. Our guide continued enlightening us with many facts and anecdotes, but I was soon wishing she was going to hand out some insect repellent. The flies out there were the biting type.

Our guide took time to show us the various plant life. She passed around an allspice plant for us to smell. The jungle surrounds Altun Ha. I was hoping to observe some wildlife - namely the famous howler monkeys. I did not see any native wildlife other than a small pet crocodile and a parrot of some boys hustling photo opportunities. However, as we walked throughout the site, we could hear a very strange-sounding bird that sounded like an old reel-to-reel audio player being played in reverse at high speed. It kind of spooked some in our group that nervously said, "It sounds like it's getting closer!"

We were allowed to climb to the top of one of the temples, Temple B-4. Our guide kept reminding us that climbing is at our own risk. The steps are uneven but the real hazard is at the top. There is a steep drop-off and no guard rails. We took in the view of the ancient courtyard from the top of the temple and then carefully made our way down the craggy steps - each group member coaching one another down. 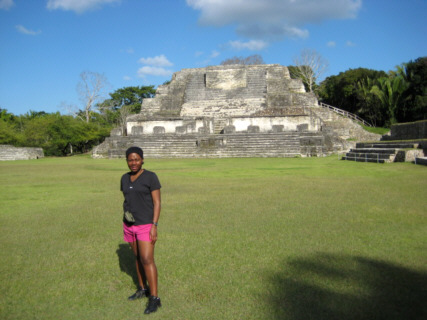 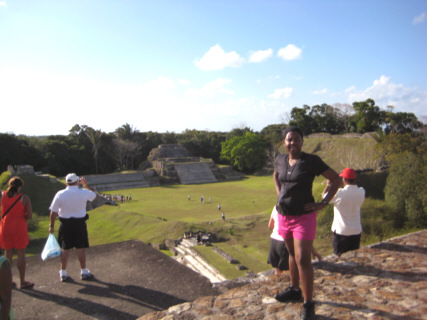 overlooking the courtyard from the top of Temple B-4 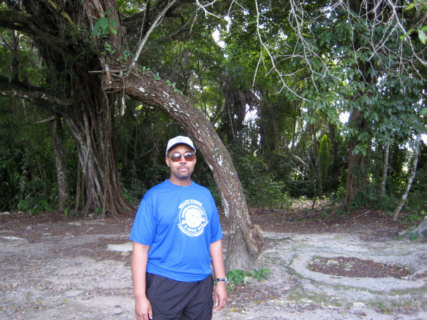 closest I got to the Belizean jungle

We were given time to visit the souvenir shacks at the site. There were mainly wood carvings being sold. The vendors were not pushy. One shack had a sign posted indicating the price is set according to the customer's attitude.

We eventually boarded our motorcoach and took in the lush green countryside during the ride back to the port. It was already getting dark when we boarded the tender for the 20-minute ride back to the ship. It was an interesting ride. One of the passengers began tapping a rhythm on the souvenir instrument he had purchased. This contagious rhythm caused many people to join in stomping and clapping. This was followed by call-and-response chants. Before we knew it, someone started singing a hymn and the rest of the passengers joined in. Nothing brings smiles to strangers' faces quite like a sing-along does. It was a good time. Continue...