This cruise left from Miami made two stops: Key West, Florida and Calica, Mexico. The ship docked at the naval base in Key West and we had to take the complimentary trolley that went to downtown or the beach. Traci and I had been to Key West before so on this trip we just walked around the town for about an hour enjoying the February 80-degree weather. There are plenty of quaint shops, restaurants, and interesting characters to see. We eventually made our way to the post office so that Traci could get stamps and mail birthday cards before catching the trolley back to the ship. 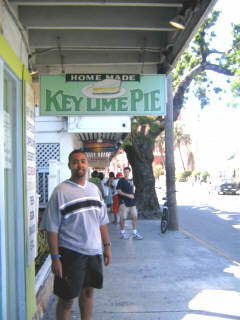 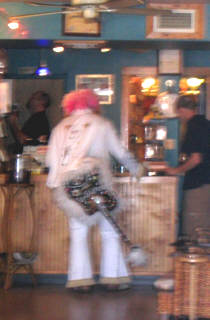 an Elvis sighting in Key West

The next day, the ship arrived at Calica, Mexico almost two hours later than scheduled due to an emergency on the high seas. I discuss that in the "Saving Lives" section of this trip report. Traci and I had originally signed up for the 5-hour Tulum Ruins tour but had to cancel. We didn't get off the ship until 3 PM. Ordinarily, this would have been enough time since we did not have to be back on the ship until 8:30 PM; however, we did not want to miss the 5:30 gospel concert. We explained our situation to the people at the ship's shore excursion desk and they refunded our money with no hassle.

This was my first time in Mexico and I was eager to look around in the limited time we had. There is nothing in Calica other than a port for ship docking. The only reason we were there was because our original port, Cozumel, was still recovering from Hurricane Wilma that struck in the fall of 2005. There were a line of taxis at the port in Calica that were taking people to Playa del Carmen, Cancun, and to the ferry for Cozumel. Traci and I decided to explore Playa del Carmen. We split the $10 taxi fare with a nice couple from Philadelphia we had met while we were lounging on the ship deck earlier. 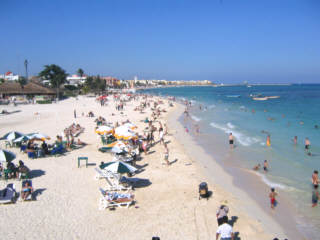 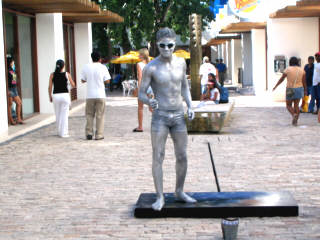 He'll do new poses for tips.

Playa del Carmen is a beach community with souvenir shops and restaurants to keep you occupied when you are not on the beach. There was even a guy who had spray-painted himself to look like a statue. If you put some money in his tip jar, he would do an impressive robot-like movement into his next pose. The shopkeepers in the area are quite aggressive when it comes to attracting tourists. They'll yell out to you from across the street to get you to check out the store. Traci and I browsed a few shops, had a look at the beach, and then bought some refrigerator magnets to add to our collection. Before we knew it, it was time for us to catch a taxi back to the ship. 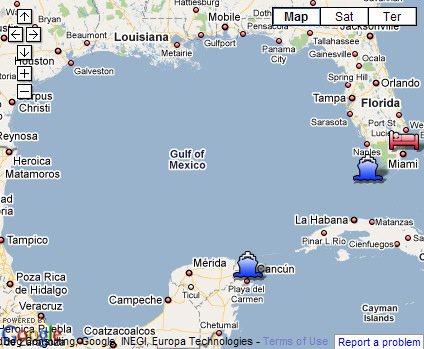 Most of the performers were on the ship during the entire cruise. We would occasionally see them chilling out. They were friendly and approachable - especially Dottie Peoples, who always greeted us with a big smile and a cheerful hello.

There were a few performers that got on the ship in Mexico. Kirk Franklin boarded in Mexico for his performance but got off the ship before it left port at 9 PM. Jeff Majors had intended to be on the ship the whole time but he too had to board in Mexico due to a last minute booking on the Oprah Winfrey Show. However, he stayed on the cruise for the remaining days.

I was a little disappointed with the concerts because the artists performed to tracks. There were no live bands. Given that there were 11 acts and a time limit on how long Radio One had access to the lounge, I could understand why the artists could not bring their bands. I hope this situation can be changed in the future. Although, the ship's sound system was of an extremely high quality, I could still sense the performers' frustration of having to be at the mercy of studio tracks and the people operating the player. No matter how well the singers sang, the energy seemed to drain out of the performance as soon as they said into the mic, "Play the next track." and then endured an awkward pause while the sound crew loaded the next song. On the other hand, these limitations led to some memorable performances. Here is the list of gospel artists that performed on the cruise:

Photography and, obviously, videography was not allowed during the concerts; however, there were tables set up after the shows where we had a chance to meet the performers, take pictures, and buy their music (cash only). While all this was going on, I ended up striking up a conversation with Martha Munizzi's husband, Dan, who was hanging out in the back of the lounge away from the artists tables. I'd seen him perform as Martha's keyboard player at other venues in the past, so I introduced myself and we chatted about keyboards and studios. He also did not miss any opportunities during the conversation to tell me to buy a copy of Martha's latest CD ("No Limits") that was due to come out March 14, 2006. Dan was the executive producer on this one. 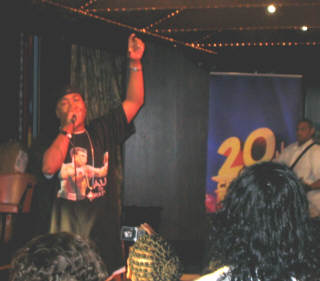 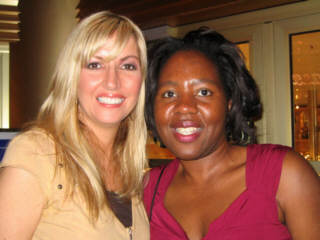 Despite my disappointment with the tracks, here are some of the performances that made an impact on me:

We experienced some drama the morning after we left Key West. The crew of our ship spotted some Cuban refugees floating in a raft in the sea. There is an international law that mandates a ship must stop to rescue anyone they see in distress. All laws aside, this is morally the right thing to do. Since all this took place around 7:30 in the morning, I didn't see any of it. I didn't even know the ship had stopped. However, Traci was able to watch the rescue while she was working out in the gym. The captain made an announcement later that day to explain what had taken place. He told us the refugees would be fed onboard the ship and then turned over to the immigration department at our next port, Mexico. He apologized for our late arrival in Mexico. This did not bother me. I was just happy lives were saved.

Our cruise ship made it back to Miami a few hours earlier than planned but we did not have to disembark until our scheduled time. We arrived well before 8 AM because there was a medical emergency onboard. The captain sped up the ship in the middle of the night to get us back to port quickly. This extra speed combined with rough seas caused the ship to rock and roll side-to-side and up and down. I woke up around 3 AM because things were starting to fall over in our cabin. It was a wild ride. Fortunately, I was wearing a motion sickness patch. Otherwise, I'm sure I would have been paying a visit to the ship infirmary. Surprisingly, Traci was able to sleep through this ordeal. She only woke up briefly because I accidentally bumped into her when I was trying to look out our cabin window to see what was going on. I eventually fell back to sleep and was up at 7 AM for breakfast.

Disembarkation was by according to your assigned luggage tag color and lasted about 2 hours starting at 7:30. Carnival now has an express disembarkation that allows passengers to carry their own luggage off the ship. On other cruises I've been on, everyone would have to leave their luggage (except for carry-on) outside their ship cabin the night before and collect it at a holding area after exiting the ship. Carnival still provides this service for passengers who prefer it. Traci and I took our own bags off the ship since we only had two.

Carnival offers shuttle service from the pier to the airports. The cost was $12 per person to go to the airport in Miami and $20 per person to go to the one in Fort Lauderdale. Alternately, there are taxis lined up at the pier but I don't know how much they charge. We took advantage of Carnival's shuttle service and were at Miami International Airport by 10 AM. This could have been a long day of waiting around since our flight was not scheduled to leave until 7 PM. Traci and I decided to visit the USAir ticket counter to see if we could get an earlier flight back to Philadelphia. The lady at the counter put us on the waiting list for the 11:50 AM flight and warned us that the flight was already overbooked. We told her we were willing to take our chances. She checked our bags and then... "Oh, no!" She told us that she forgot to attach the pink tags to our bags that indicate we are potentially changing flights. Yikes! All this while USAir was trying to recover from some recent bad press about lost luggage. The lady told us not to worry. She'd make some phone calls and take care of the problem. I guess we'd have to find out just how well USAir is recovering from the bad press.

I am happy to report that everything worked out better than we could have imagined. A few minutes after we arrived at the gate, we were paged to the counter and told that there was room for us on the 11:50 AM flight to Philadelphia. Hallelujah! When we arrived at baggage claim in Philly. We had no problem identifying our luggage on the carousel. They were the suitcases with the bright pink tags! USAir had made our day and created a happy ending for our vacation.

I think Radio One did a nice job with this cruise. They provided a variety of interesting activities and brought some outstanding artists onboard to perform. I liked the family Christian atmosphere and I felt like Radio One really appreciated having all of us on the cruise. There were great opportunities for networking with the people who decide what material gets broadcasts to millions of listeners. Some people took advantage of this by bringing their demo packages and others shared their ideas for charity projects with the decision-makers of Radio One. All these positive aspects of the cruise were provided for a very reasonable price.

In case you haven't figure it out by now, my biggest disappointment with the cruise is that the performers did not perform with live bands. I regularly listen to gospel radio because gospel music is one of the few genres whose artists still put out live recording CDs. Heck, many of the gospel songs I hear on the radio even start with audience applause. So, to come on a gospel cruise with some of the top names in the business and have to watch them be confined to pre-recorded studio tracks really let me down. Okay, I think I've spent enough time on my soap box.

Radio One told us they have ideas of how they can make the cruise better but they need to fill the ship with listeners to make these ideas reality. If they fill the ship then they have full control of the onboard itinerary - meaning they can set the time and place of all the activities and concerts. They might even be able to allow the performers to bring their bands:). I'm sure marketing group at Radio One will get together and figure out a way to make this happen. I'm rooting for them.