The theme nights were pretty much the same as they were in previous years: Represent Night, Formal Night, White Night, 70's Night, Mardi Gras Night, Pajama Night, and Toga Night. I wore the same costumes I'd worn in previous years for Mardi Gras Night and 70's Night. Traci wore new gear. I participated in each theme except Toga Night and Pajama Night. Traci did all the theme nights. This was the first year she tried Toga Night in which she wore one of the sheets distributed by the Tom Joyner staff. The challenge was to wrap yourself in the sheet so that it doesn't fall off as you attend the ship activities that evening. There was an instructional channel on TV to show how to wear a Toga. 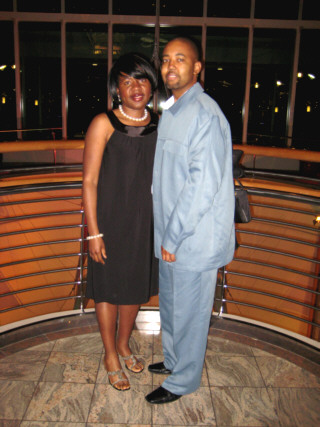 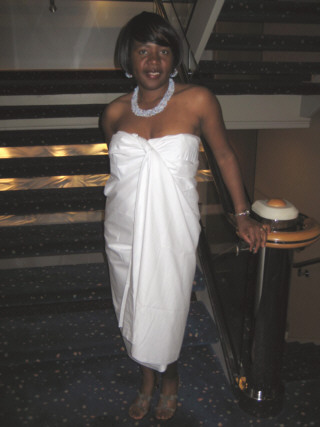 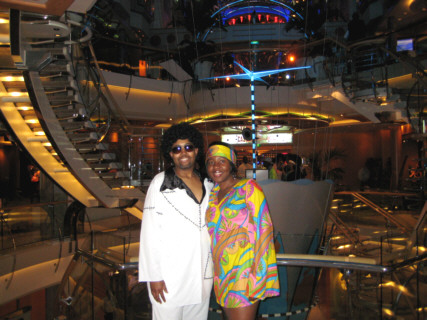 For Mardi Gras Night, Traci dressed as a lady bug and received many compliments. Several people wanted to take pictures of her. Mardi Gras Night continues to be my favorite. People wore very creative costumes and participated in the midnight parade on the Promenade Deck. The party carried over right into the Charlie Wilson concert in Studio B. What a night. 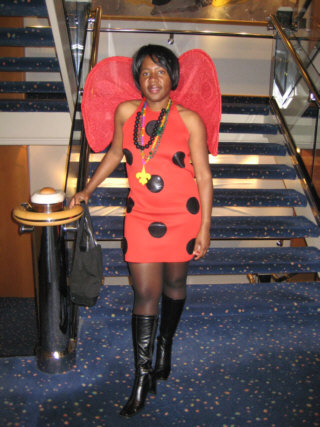 Traci as a lady bug 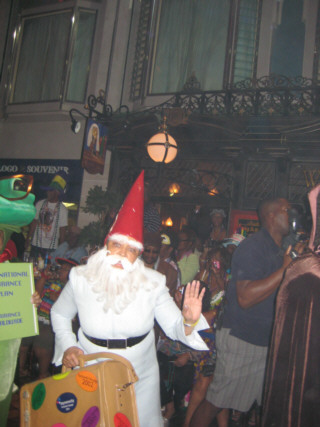 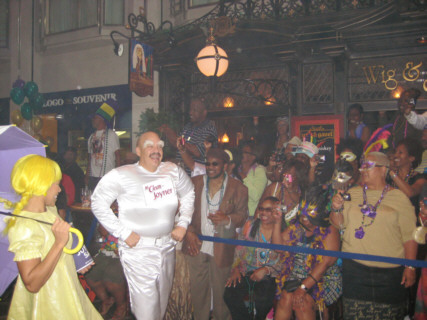 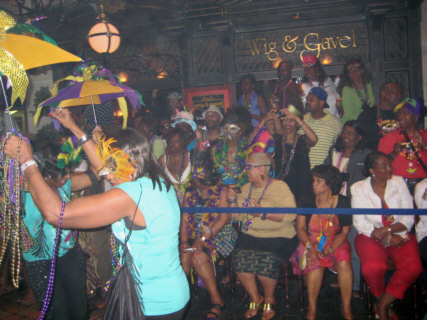 The original itinerary for this cruise was the Mexican Riviera with stops in Cabos san Lucas, Mazatlan, and Puerto Vallarta. However, due to a Swine Flu (H1N1 virus) outbreak in Mexico about a month before the cruise, Royal Caribbean suspended all stops in Mexico. Our itinerary was changed to two days in San Francisco, California and one day in Victoria, Canada. I felt bad for the people boarding the ship who were from San Francisco. Imagine paying for a vacation that takes you home for two days. 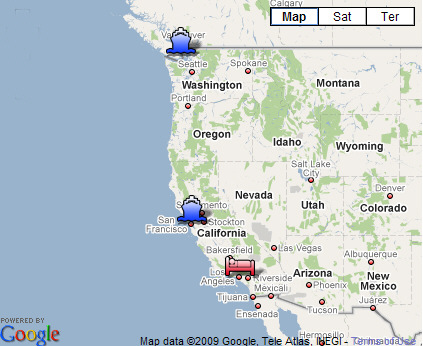 As consolation for the itinerary change, each passenger received onboard credit based on their cabin class. In our case, Traci and I received $100 credit each. It had to be used before the cruise ended. Traci ended up buying outfits and photos of us that the ship photographers took throughout the week.

San Francisco was our first port of call. It is a great city with many fun things to do. Our cruise ship was scheduled to be docked at Pier 39 for two days. It was chilly and windy during most of our stay - definitely not as warm as the Mexican Riviera would have been. I recommend visitors to San Francisco always have a jacket handy even if it is warm out. The temperature seems to drop drastically in late afternoon. Those who are unprepared will probably end up buying a souvenir San Francisco sweatshirt or jacket. Just ask Traci about the $20 brown jacket she bought:).

Traci and I had spent part of our honeymoon in San Francisco back in 1996 and had already done many of the attractions that I feel first-time visitors should not miss such as: Alcatraz, Muir Woods, Sausalito, Chinatown, and a city tour. As much as we enjoyed them the first time, we did not want to pay to do these things again. Therefore, during our first day in port, we wandered around Fisherman's Wharf.

Fisherman's Wharf has been a part of the city's seafood industry since the Gold Rush days. Today, it also has many souvenir shops, stores, and restaurants. There are also some very good street performers to keep visitors entertained. We spent a little time looking at the noisy (and rather smelly) sea lions that congregate on platforms in the water. It's fun to watch them bark at each other as they jockey for the best lounging spot. 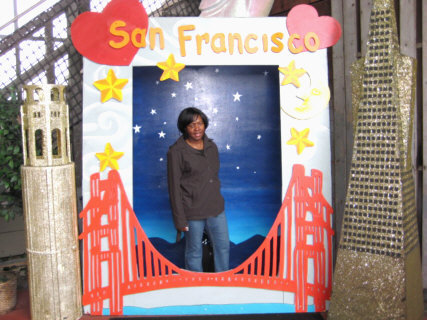 "Hey! I thought we were going to warm and sunny Mexico!" 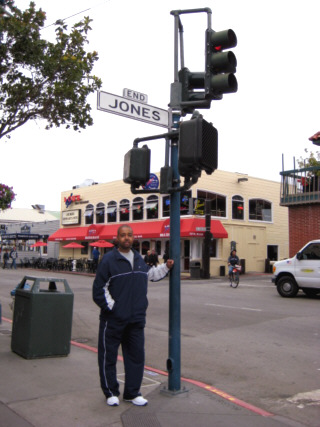 Walking west from Pier 39 on Jefferson Street, we encountered more shops, restaurants, hotels, and small quirky museums. We just had to make sure we watched out for the Bushman. The Bushman is a creative pan handler that pops out of a fake bush on the sidewalk and yells to startle an unsuspecting passerby. This is then followed by laughter and applause of bystanders that are already hip to the game. People put tips in the Bushman's cup and wait for him to startle the next unsuspecting victim. The Bushman seems to be a local legend. I saw people pose for photos with him. I even saw a guy wearing a T-Shirt with the words 'The Bushman scared the @#$% out of me!'

We finished off our wandering that day at a Walgreens convenience store where we bought a few odds and ends. I took a walk down the snack aisle as I love to do when I'm in a different city. Because of its large Chinese population, San Francisco has some really interesting snacks such as dried squid and shrimp chips. I ended up buying a bag of the shrimp chips. These puffy crisps had a slight shrimp flavor. I munched on them in our ship cabin throughout the rest of the week.

On our second day in San Francisco, we decided to rent bicycles. There are several bicycle rental places at Pier 39 and vicinity that offer the opportunity to bike across the Golden Gate Bridge. It is an 8-mile ride on a mainly flat or downhill paved path that takes you along the coast of San Francisco, across the bridge, and into Sausalito. From Sausalito, you can catch the ferry back to San Francisco or you can continue another 8 miles to Tiburon and catch the ferry from there. Those who want more time on the bicycle can always bike their way back across the bridge instead of using the ferry.

We knew from our walk the previous day that all the rental places have pretty much the same rates. We chose Blazing Saddles at Pier 39 because it was close to our cruise ship. Additionally, we were able to use the online discount coupons we had printed from BayCityGuide.com before the cruise.

Traci and I wanted to rent a tandem bike. We decided to abandon that idea after the friendly rental guy let us take a test ride. Traci was on the back seat and did not like the idea of not being able to steer the bike from there. Therefore, we each rented a Comfort Model bicycle.

We were each given a map, ferry ticket, helmet, and bike lock. The bike had a convenient pouch for storing other items we brought with us or purchased along the way. We had to ride on busy Jefferson Street for 3 blocks before we reached the start of the bike path.

Although most of the path is flat, we did have to huff and puff up two hills before we got to the Golden Gate Bridge. The pavement on the bridge is wider than the typical sidewalk. This was good because there were several walkers and riders out that morning. Our ride across was smooth. Even with all the motor vehicles speeding by, we felt no bouncing or swaying.

The path runs out after crossing the bridge. We coasted the rest of the way down a winding road into the town of Sausalito. Fortunately, most of the road has a wide shoulder and we did not have to worry too much about motor vehicle traffic.

It was an overcast and chilly morning when we began our bike ride but by the time we reached Sausalito, it was sunny and mild. The bike ride from San Francisco to Sausalito normally takes about 1.5 hours but it took us 2 hours because we stopped several times to take pictures. 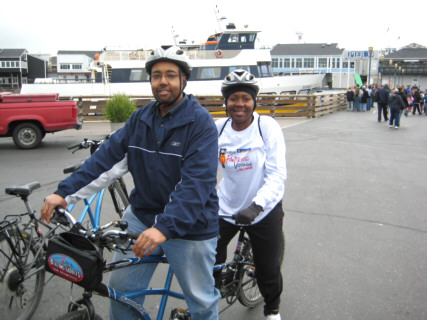 The tandem bike was not working for us. 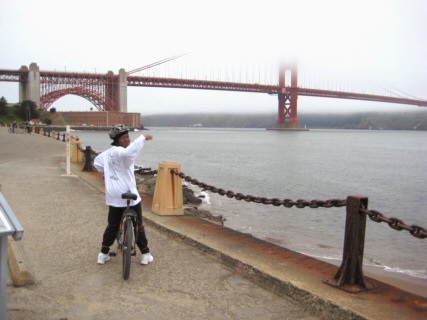 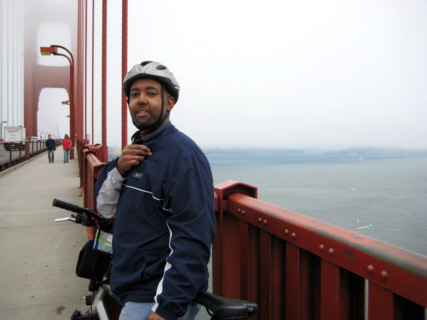 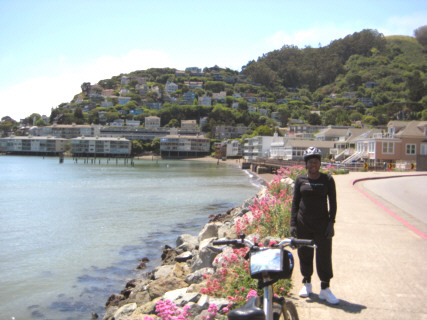 We made it to Sausalito.

Sausalito is a quaint bayside town with shops and eateries. Traci did a little shopping before we took the 25-minute ferry ride back to Pier 41 in San Francisco. We returned the bikes and settled the bill. Blazing Saddles will charge you the hourly rate ($8) or day rate ($32) depending on whichever is cheaper for the amount of time you rented the bike. I thought the bike ride was a nice, relaxing way to enjoy the bay area. Continue...