The first of our all-day excursions was to the city of Rouen. To get there, we needed to catch the 8:12 AM train from the Gare St. Lazare train station which was a short metro ride from our hotel. The train ride between Gare St. Lazare and Rouen was about an hour and a half. I actually splurged a little and bought 1st class tickets when I booked online two weeks prior. I donít think they were worth the extra 40Ä (approximately $44 U.S.) per person. The only difference seemed to be that our seats had a table in front of them.

Rouen is the capital of the Normandy region of France. For our daytrip there, Traci and I would be focused on Rouenís historic downtown. Walking around the historic section made me feel like I had been transported into a medieval fairytale. There are half-timbered buildings, an old stone tower, and grand cathedrals. It was magical when the cathedral bells began to ring at the same time. I especially loved the occasional low-pitched ďBong!Ē of one of the bells. 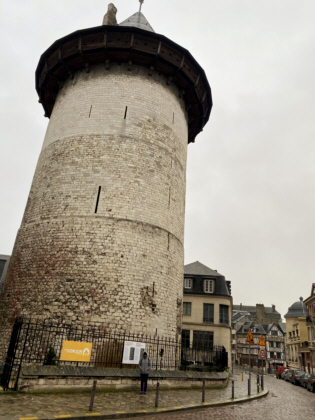 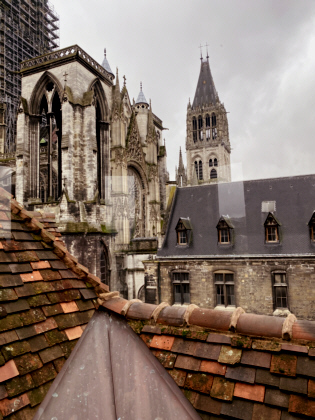 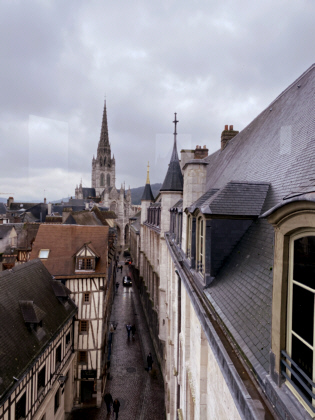 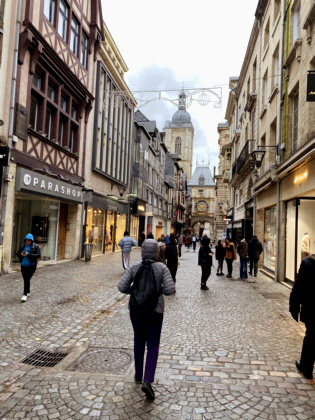 Rouen, among other things, is known for being the place where Joan of Arc (Jeanne d'Arc) was tried and burned at the stake on May 30, 1431. She was a peasant girl who heard the voice of God telling her to take up arms against the English who were occupying northern France at the time. She dressed as a man and successfully led the French in a battle to liberate the besieged French city of Orlťans thus enabling the crowning of the French king, Charles VII. After a few more successful campaigns, Joan was eventually captured by the enemy. She was tried, convicted, and put to death.

Rouen is all about Joan of Arc. I thought it would be a good idea to begin our day in Rouen by visiting the Historial Jeanne d'Arc experience (Nope, that's not a typo. It is really called Historial). This attraction is housed in the Archbishopís Palace. For the next hour, Traci and I, using the provided English translation device and ear buds, were led by a video host through the various rooms of the building while reliving the circumstances that led to the trial and execution of Joan of Arc. In each room, we were surrounded by projections on the walls and other special effects used to recreate the medieval setting while listening to witnesses, clergy, and others give their points of view. We climbed stairs and walked through dungeon-like chambers. We walked through chapels, tower rooms, a grand hall, and other areas of the palace. The building itself was an attraction. We visited the room where some of the actual trials of Joan of Arc took place in 1431. She was charged with approximately 70 counts ranging from witchcraft to dressing like a man. The tour led us to the room where her Trial of Rehabilitation took place. That trial exonerated her in 1456 Ė 25 years after her execution (Gee, thanks.). Joan of Arc was canonized as a saint in 1920 by Pope Benedict XV. The Historial Jeanne d'Arc was a captivating way to learn about Rouen's heroine. 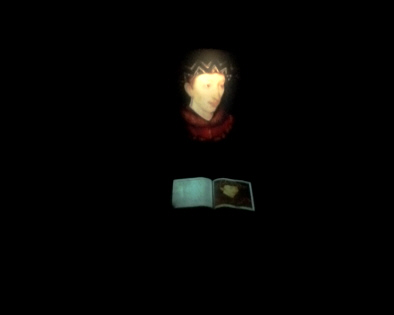 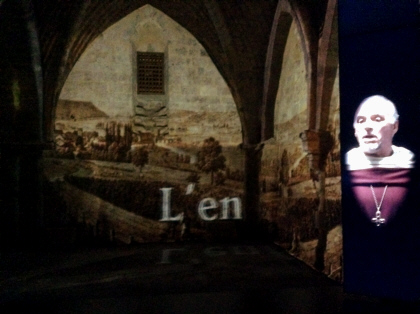 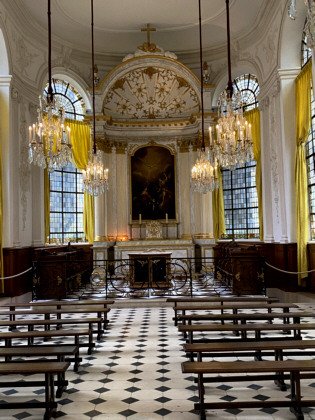 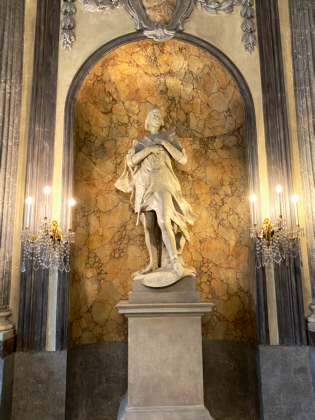 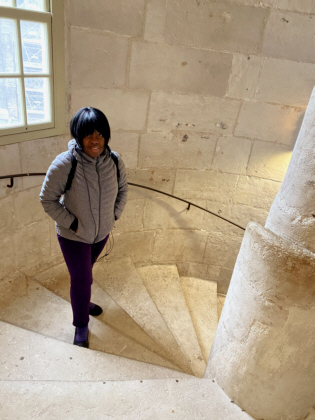 Just around the corner from the Historial Joan of Arc is another major attraction Ė Rouen Cathedral (Notre Dame). This is a huge gothic cathedral covered in friezes and capped by soaring spires. Inside the dark cathedral, I was dwarfed by the incredibly high ceiling. There was an ornate altar and stained-glass all around the sanctuary. Detailed religious statues keep watch. I guess you could say the cathedral is maintained as it was in the Middle Ages temperature-wise. It was freezing in there! In fact, it seemed like I just could not get warm at all that day. It was cold outside. The train stations were cold. The train that brought us to Rouen was heated but uncomfortable because of a draft that kept my feet and legs cold. However, it is not my intent to complain about the weather. I was on a mission during our visit to Rouen Cathedral. Two of my coworkers are into genealogy. Through DNA and the internet, they discovered that one of their ancestors is Rollo the Viking (860-932). When I told them about my plans to do a daytrip to Rouen, they told me that Rolloís tomb lies inside of the cathedral. Rollo and his Vikings conquered Normandy. They invaded Rouen in 876. Rollo converted to Christianity in 912. I had never heard of Rollo until I told my same coworkers that Traci and I had spent a weekend in Fargo, North Dakota several months prior to this trip. My coworker told me that there is a statue of Rollo in Fargo of all places! But back to Rouen, I told my colleagues that I would take a picture of their ancestorís tomb. 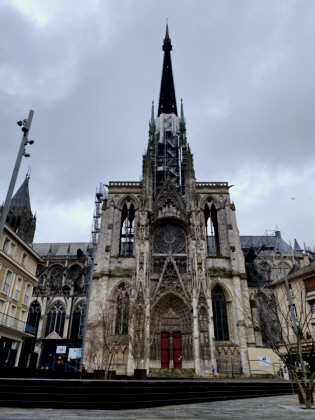 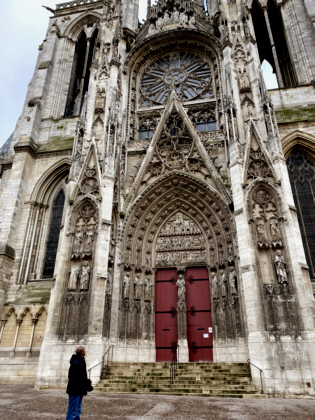 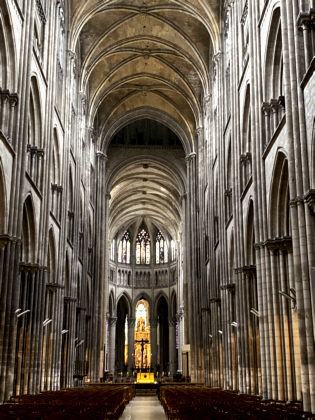 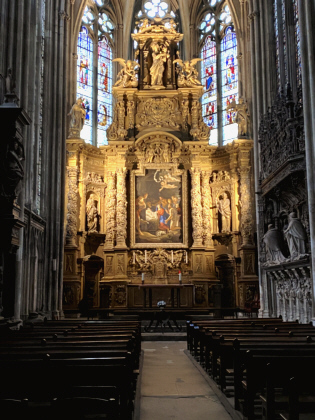 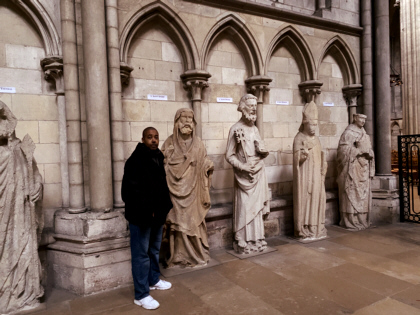 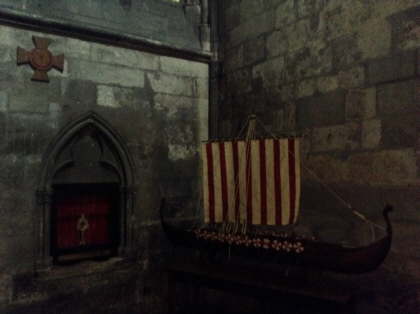 A lady who was working in gift shop at the back cathedral told me the location of the tomb. I searched all over the sanctuary but could not find it. I was certain I had understood her directions. One of the things I noticed about the people I met in Rouen was that they spoke French a tad bit slower than the people I met in Paris. That slight reduction in tempo was huge in my ability to comprehend. As much as I did not want to bother the shopkeeper again, I knew I could not leave Rouen without the photo I had promised my coworkers. When I asked again, this time, the kind woman invited me to follow her but only got a few steps before she realized the gate that allows access behind the altar was closed. She apologized and assured me that if I returned after 2 PM, the gate would be open.

This was a welcome break. Traci and I were starving. Finding some place to eat became a major challenge. Although I had verified the Sunday hours of the Rouen attractions I thought would interest us, I totally missed the fact that the shops and most of the restaurants in historic Rouen are closed on Sundays! The half-timbered medieval buildings of the district house shopping opportunities ranging from antiques to high-end designer fashion - all closed on Sundays. Traci was not happy that I chose Sunday as our day to explore Rouen. 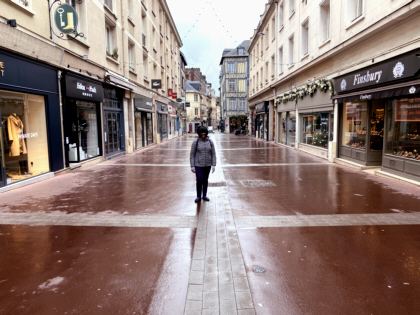 Sorry, Traci. I didn't know the shops and most of the restaurants are closed on Sundays.

With very few options for dining that day, Traci and I settled for a place called Cosy Lunch. I was so hungry that I did not even notice all the cats lounging around inside the restaurant until we sat down and ordered. Occasionally, a cat would wake up and leap up onto the counter where one of the waiters would play with it. I'm sure a health department would not allow a scene like this to play out in the U.S.. Nevertheless, I quickly ate my croque madame (ham, egg, and cheese) galette and drank an interesting mojito-flavored soda. I was just thankful I did not find any cat hair in my food. 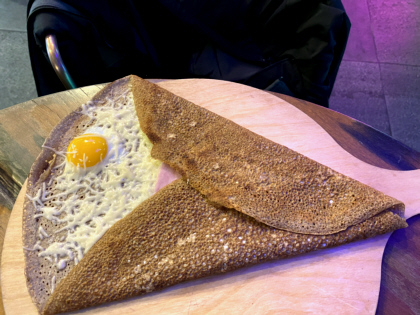 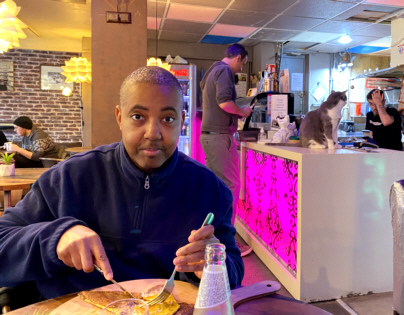 Please don't let me find cat hair in my food.

We went back to the cathedral after lunch and I was finally able to take a photo of the tomb of Rollo. There were other tombs around the back of the altar such as the one containing the embalmed heart of King Richard I (Richard the Lionheart) who died in 1199. 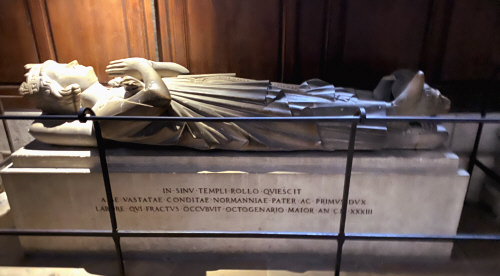 tomb of Rollo the Viking

The other major attraction of Rouen is the Gros Horloge (Great Clock). This astronomical clock, which includes the phases of the moon, has been there since 1527. Traci and I did the hour-long audio tour which had us ascending the belfry tower while learning about the governors that lived there, the clock mechanisms, the artwork, and other interesting features. The most memorable part of the tour for me was the view of the city from the top of the tower. I could see all of its grand cathedrals. The icing on the cake was when the bells began to toll. 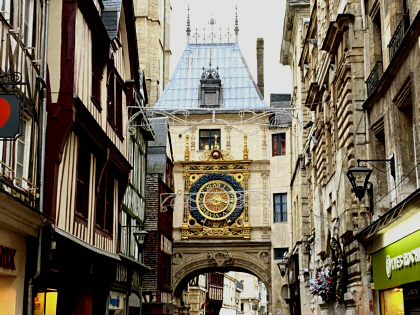 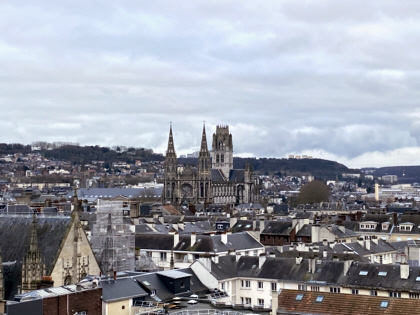 view from the belfry tower 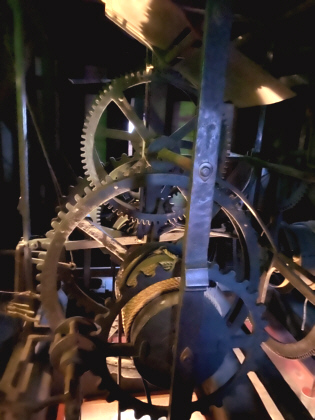 gears of the clock 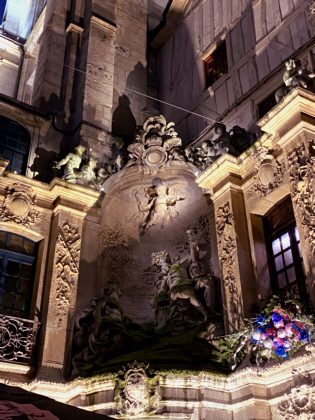 artwork around the clock

Just down the street from the Gros Horloge is La Place du Vieux-Marchť (Old Market Square). This was where Traci and I experienced our Doh! moment. The square is surrounded by restaurants that were actually open on Sundays! Furthermore, there were no cats roaming around inside them! My reason for going to the square was to see the spot where Joan of Arc was burned alive at the stake in 1431. There is a small sign at the spot where the gruesome act took place. It is located on the grounds of the …glise Sainte-Jeanne-d'Arc (Saint Joan of Arc Church). The church is relatively modern. It was built in 1979. Traci and I had a look inside. In true French fashion, the stained-glass was awesome. The stained-glass was salvaged from the former Renaissance Period chuch of Saint Vincente that stood in the square for centuries until it was destroyed in World War II. 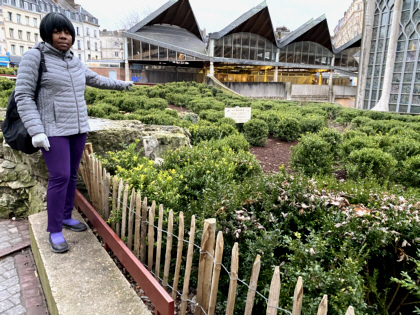 The sign marks the spot where Joan of Arc was burned at the stake in 1431.

Our day in Rouen was quickly coming to an end. We needed to make our way to the Rouen train station for the 6:18 PM train back to Paris. We thought we had left enough time to walk to the station but we ended up in panic mode. We thought we were following the posted the sign leading to the train station but after several minutes of unfamiliar scenery, I finally decided to ask someone. It turned out we missed the sign telling us to turn. When we backtracked and found the sign, it indicated a 15-minute walk to the train station. That would leave us only five minutes to determine the departure platform and make our way to the correct train when arriving at the station. Yikes! We power-walked our way to the train station in ten minutes. We were relieved to find out our train was delayed by 20 minutes and later by 30 minutes. continue...