It was a 45-minute ride from Bruges to Gent. Once again I fell into a deep sleep during the journey. Whereas Bruges is totally dedicated to tourism, Gent is not. Gent is a working city. In fact the part we visited only had one souvenir shop as compared to the multitudes we saw in Bruges. The major attraction in Gent is its fascinating old section with three grand churches - one of which, St. Bavo's Cathedral has the Mystic Lamb painting. Our guide led us to this historic square, gave a short commentary, and then told us to be back on the bus in an hour. Traci and I visited the souvenir shop, entered one of the churches, and took pictures on one of the scenic canal bridges. We stop in a three-story McDonald's to use the restroom. One thing that annoyed me during our visit to Belgium is that there was always someone sitting outside the restrooms in the tourist areas collecting a fee to use the facilities. The fee at this McDonalds converted to approximately 60 cents per person. But anyway, the reason I mention this McDonalds is because from its third floor window, we got one of the most picturesque views of the square. To me, it looked like a town scene from the cover of a Christmas card. 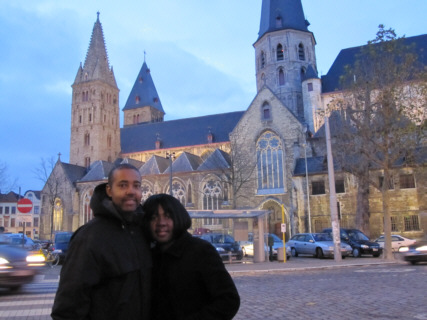 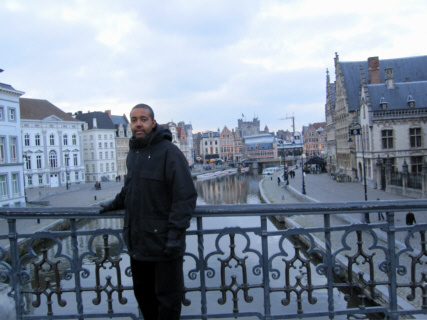 a canal bridge in Gent 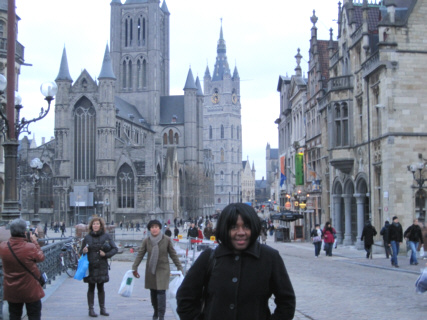 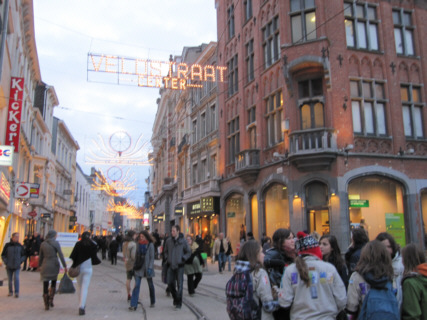 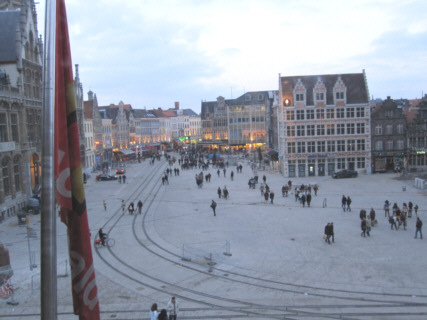 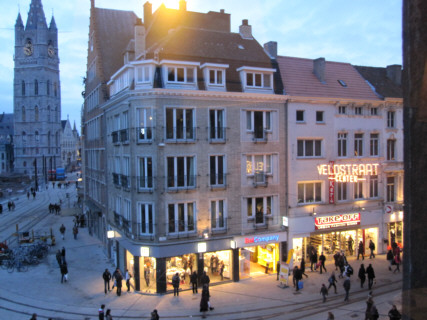 Before long, it was getting dark and time to head back to the bus. It felt good to thaw off in the warmth of the bus. It was then that I realized how much of a beating my feet took from walking on cobblestone all day.

Traffic was heavy as we entered the city limits of Brussels. We rode through some section where we saw quite a few people of African descent and businesses selling African products. The Congo in Africa was once a colony of Belgium. Today there is a Congolese neighborhood in Brussels.

Our bus driver snailed his way through the congested streets and let passengers off at points throughout the city that were somewhat equidistant to the various hotels. Traci and I had discussed our dinner plans on the bus. It seems that whenever Traci and I travel abroad, we have a craving for Pizza Hut. But before we went to Pizza Hut, I still wanted to taste "authentic" Belgian pommes frites. Traci knew from her first trip to Belgium about a place called Chez Patrick located behind our hotel. Even though Chez Patrick is more of a tavern, you can order pommes frites to go. They are served in paper rolled up like a cone. You eat them with tiny plastic forks and are given a choice of ketchup or mayonnaise. Traci and I shared an order with ketchup. The pommes frites were delicious but not unlike good fries I've had at other places.

The streets in downtown Brussels are not laid out in a grid pattern. We got a little turned around in our search for Pizza Hut but eventually found it after asking the concierge at a Radisson Hotel. Our meal really hit the spot. 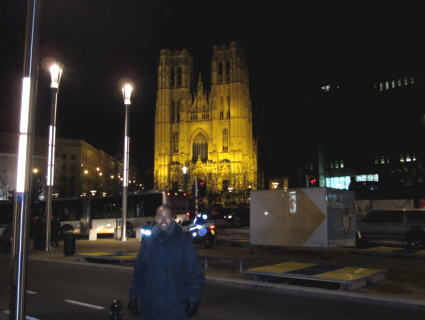 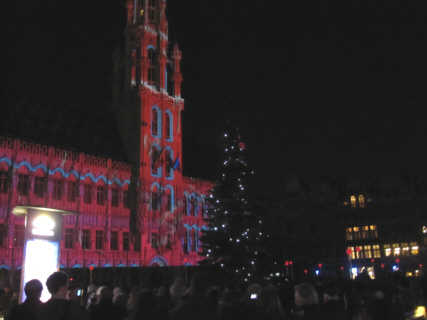 laser show in the Grand Place

We walked off our meal by hanging out in the Grand Place. There was a Christmas show going on that included singing and laser lights. It was spectacular. It was a great way to spend our final evening in Belgium but I could think of no better way to end it than with a Belgian waffle and hot chocolate. Traci and I found a waffle shop and did just this. I learned there are different varieties of waffles. Traci had the Liege waffle that contained crunchy sugar crystals inside. I had the Brussels waffle whose interior does not have crunchy sugar crystals. Of course, I dressed it up even more with whipped cream, ice cream, and caramel sauce - heavenly! 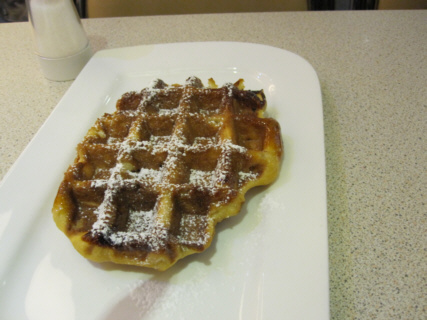 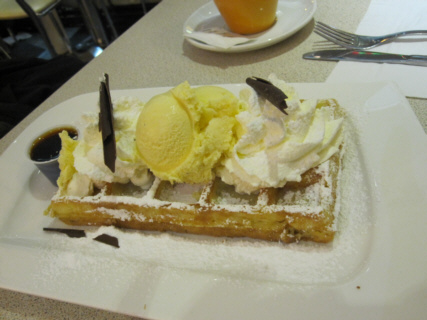 Our flight back to Dulles was thankfully uneventful. I still hadn't adjusted to the time difference but this worked out in my favor. I slept for five hours of the seven-hour flight. Main Page...