For dinner Friday evening, we had reservations at the Atomium Restaurant. Traci booked it earlier that week. The Atomium is Brussels' iconic tourist attraction. Its unique shape represents the arrangement of atoms in an elementary iron crystal (Whew! It's been a long time since I took a chemistry class.). It was constructed in 1958 for the World's Fair. Among other attractions, the Atomium has a restaurant in its highest "atom".

Our hotel was located just a short walk from the Gare Centrale train station. We decided to figure out how to take the metro from there to Heysel/Heizel, the closest metro station to the Atomium. Most of the signage and announcements in the metro stations are in Flemish and French. However, we had no problems finding our way. We just followed the map and looked out of the window to see which station we were at. Our journey lasted about 20 minutes and consisted of one train change.

We exited the metro at the Heysel/Heizel station and I got my first look at the Atomium. This huge structure was all lit up and seemed to float in the nighttime sky. Traci and I started walking towards it but became a little confused as to how to actually get to there. There were sidewalks, gates, and a tram station. I could see there was some drama unfolding along one of the paths. There were two guys next to a motorcycle engaged in a heated argument. It looked like something was about to go down and we did not want to be around when it did. We headed along a different sidewalk hoping it would lead us to the Atomium without having to walk by the confrontation.

As fate would have it, the path we chose actually led to a pedestrian bridge that would have led us away from our destination. We had to turn around and head back towards the drama. By the time we turned the corner, the argument had escalated into shoving and hand-grab deflections. A lady with super-model looks was begging them to stop. Her pleas seemed to work as the two men came to a tense stand-off while taunting each other. Traci and I scurried passed all this commotion and headed to the Atomium as the shouts from the argument faded into the distance. They say that French is a romantic language but it can sound downright evil when used in an argument such as the one we witnessed.

We arrived at the entrance of the Atomium and encountered our second hiccup of the evening - the doorman could not find our names on the reservation list. We spent a few moments searching his list but to no avail. Fortunately, Traci had saved the confirmation email on her iPhone. Voila! The doorman invited us to the elevator with two other couples. We were soon being whisked to the top "atom" of the structure.

The elevator ride was pretty cool. The elevator car had a glass ceiling that allowed us to watch as we were being sped to the top. It gave me the feeling of being launched into space.

Dinner at the Atomium 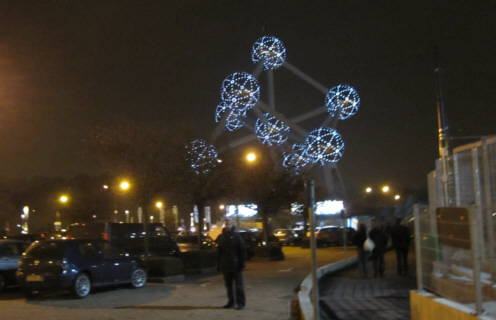 heading to dinner at the Atomium 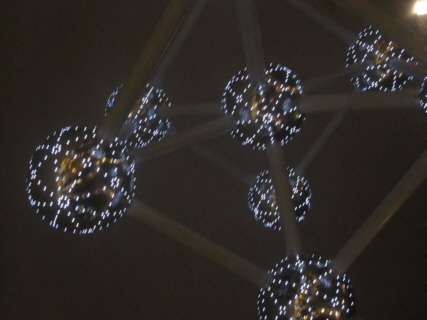 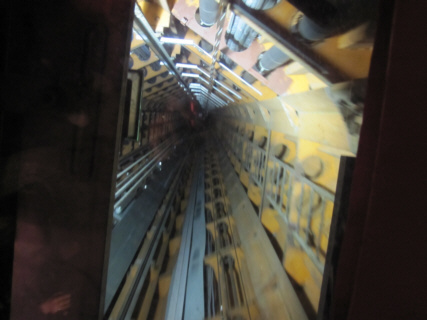 elevator ride to the top of the Atomium 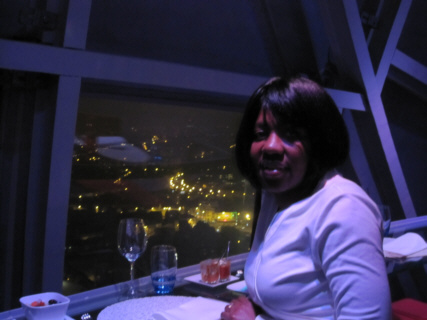 dinner with a view

The hostess showed us to our seats. All of the table seating "with a view" was booked when Traci made our reservation; therefore, we had "bar" seating. We were not at an actual bar with a bartender. We were seated on stools at a table ledge that gave a great nighttime view of the Brussels skyline.

Our menus were in French, as were most of our interactions with the wait staff. There was not much English spoken at this restaurant. This gave me yet another opportunity to practice speaking French. I was having a good time with this. I did eventually ask if there was a menu written in English. Our waiter was only able to find one.

The restaurant was offering 2-course to 4-course meals; the only difference being the number of items you chose from the menu. The one restriction is that you were not allowed to choose two meat dishes without paying extra.

When it comes to ordering food, Traci normally has a lot of questions about how the dish is prepared and the ingredients. This outing was no exception. Our waiter, who had a pretty good handle on basic English, was soon running out of adjectives and comparisons. My translation skills were starting to get maxed out in cases where he wasn't able to find an English word. In the end, we got through it by speaking Frenglish.

It took Traci and me a while to decide what we were going to order. We each ended up doing a 2-course meal. I ordered shrimp ravioli for my main dish. Traci ordered a white fish called bar. Both of these dishes were excellent - especially the filet of bar that Traci ordered. For our dessert course, Traci ordered a delicious apple tart. For me, there was no doubt of what I was going to order. This was my first trip to Belgium - home of the Belgian waffle. My waffle was sprinkled with sugar and topped with vanilla ice cream - yum! It also came with a side of Belgian chocolate sauce. I did not use much of it. The Belgians prefer their chocolate a bit too pure for my taste. It was too bitter for me.

Dinner at the Atomium 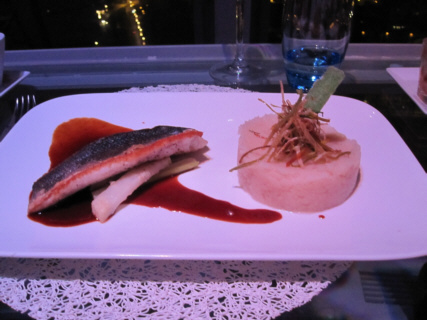 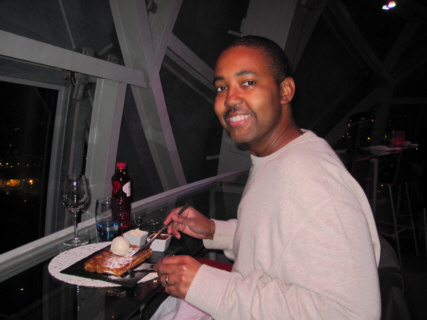 my first Belgian waffle in Belgium! 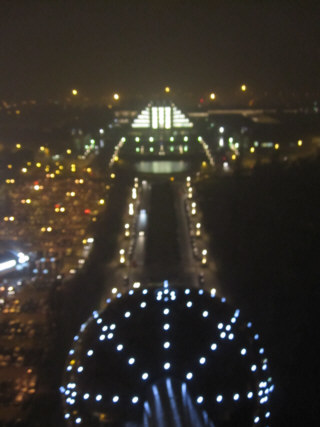 a view from the top

We spent about two hours in the restaurant. Our dining experience at Atomium converted to approximately $90. It was snowing thick, wet flakes as we walked from the Atomium to the metro station. Before long, we were back at our hotel. It had been a great first day in Belgium for me.

On the other hand, I had the roughest time trying to get over jet lag. I was so sleepy when I dragged myself to bed around 11 PM Friday night. I just knew I was going to get a good night's slumber. That night turned out to be an hour of sleep and several hours of staring at the dark ceiling trying to go back to sleep. My body still thought it was daytime. No sooner than I got into a deep sleep, we received our 7:15 AM wake-up call. The Royal Windsor really harasses you with their wake-up calls. It rang at least four more times after I answered the first call.

Full-day Excursion to Bruges and Gent

We decided not to eat breakfast at the hotel Saturday morning. It was too expensive (approximately $40 per person). Instead, we bought pastries and hot chocolate from one of the small cafes inside the train station up the street and brought them back to the hotel. We were picked up at the hotel at 9 AM by a tour van from Brussels City Tours and taken to their central hub to be transferred to the motor coach that would take us on our full-day excursion to the medieval cities of Bruges and Gent.

It was approximately an hour ride to Bruges, during which time our tour guide provided facts about Belgium in English and Spanish. I was amazed by his mastery of languages. In addition to English and Spanish, I would hear him converse in French and in Flemish throughout the course of the day. He told us that all school children in Belgium are required to learn at least French, Flemish, and English.

Even though our tour guide's commentary was interesting, I was in a deep sleep within a matter of minutes from the time our bus left the city. I awoke during the journey to find our guide coming up the aisle collecting money. I apologized for napping and asked what the collection was for. He explained it was for the optional boat ride in Bruges. I paid the 13.50 euros (approximately $17) for Traci and me.

Bruges was the first stop of our excursion. The city has existed for approximately 1,000 years. Today, it is predominantly a tourist attraction. Many of the old buildings now house eateries and souvenir shops.

Our tour guide told us he likes to do the Bruges portion of the tour in the morning because the city gets too crowded in the afternoon. When we stepped off the bus, I could not image the city being more crowded than it already was. There were tour groups and visitors everywhere. Our guide held a purple umbrella over his head to help us follow him through the crowds. We were walking on narrow sidewalks and cobblestone streets. The sea of people in the streets would occasionally divide when we heard the clip clop of a horse pulling a carriage of tourists down the street.

It was not difficult to see what draws people to this town of which I had never heard. The architectures of the old buildings are fascinating. We saw gingerbread-like houses, medieval courtyards, decorative canal bridges, and soaring bell towers. 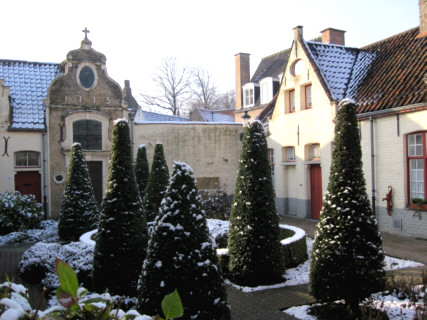 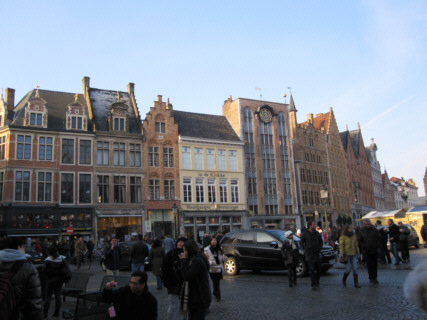 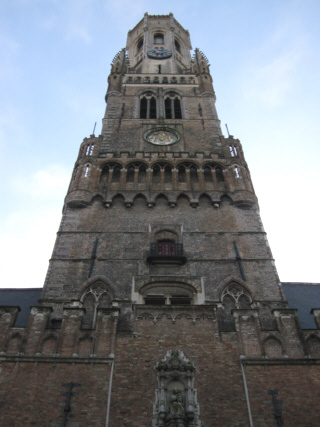 Most of our tour of Bruges was spent outside on this bitterly cold day. I was wearing my winter jacket, gloves, and hood, but the slightest breeze would sting my nose and cheeks. We were so happy when our tour guide told us he would give our group a few minutes to see the inside of Our Lady Church. We thought this would be our opportunity to warm up a little while we looked at a statue created by Michelangelo. To our surprise, the church interior, as stunning as it was, was not much warmer than the outdoors. We could see our breaths. People were trying to warm their hands over the prayer candles.

Our tour continued through the town to the entrance of the boat ride. I was sure the boats would be heated and covered on this brutally cold day. Wrong! We were crammed onto an open-air motorboat and guided down the canal. Our captain narrated in English and French as traveled under several charming bridges. The 30-minute boat ride, despite the cold, was a beautiful way to see the city. 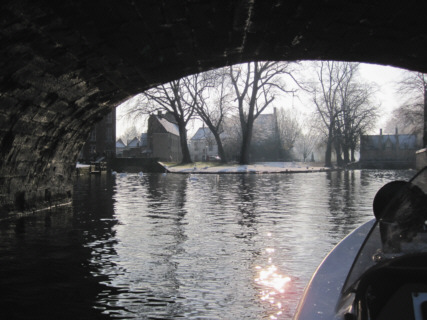 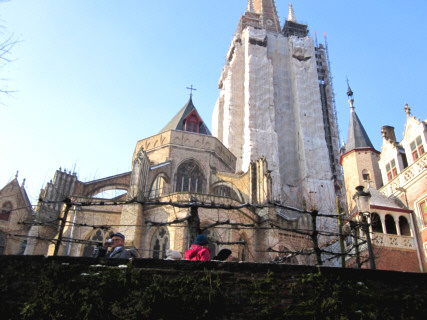 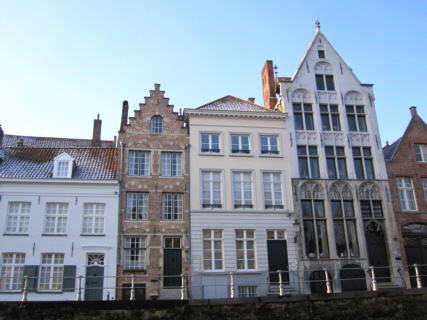 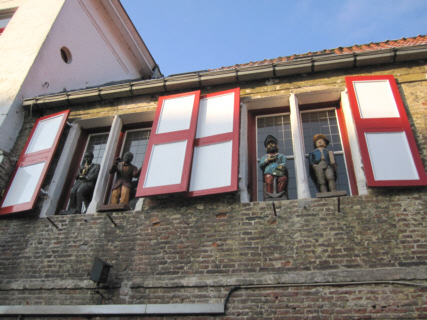 After the boat ride, we were led down a street lined with chocolate shops. We entered one of them and were given the opportunity to sample some of the products. Our day in Bruges ended with an hour of free time during which time Traci and I explored some of the shops and got a bite to eat. Continue...