We hopped off the bus at the Sagrada Familia, one of Barcelona's most famous attractions. Antoni Gaudi began construction of this huge cathedral in 1882. He worked on it until his death in 1926. Like many of Gaudi's creations, it is - well - gaudy. In other words, this tall pointed building really stands out against its surroundings. A close-up look reveals hundreds of religious figurines sculpted into the facades. One facade tells the story of Jesus' birth (Nativity Facade) and the other of His death (Passion Facade). The detail of the sculptures is stunning. The cathedral is still not completed. It is under constant construction by artisans carrying on the artistic styles of Gaudi. Admission to the Sagrada Familia funds the project.

Traci and I paid to enter. We had to use cash since credit cards are not accepted. I was finding out that many of the tourist attractions in the area do not accept credit cards. The ones that do require some form of identification.

We took a look at the cathedral's interior. There is no altar or pews - just a lot of construction equipment. It was fascinating to look at the height of the very high ceiling in the sanctuary and the split columns supporting it.

We had a look around at some of the items in the museum at the bottom of the church. It contained mostly information about construction material and how nature influenced Gaudi's artistic style.

One of the more interesting things we did during our visit to the Sagrada Familia was take an elevator to the top of one of the spires. We heard that people sometimes wait in line for hours to ride this small elevator but on the evening we were there, the line was short. We did not wait more than 15 minutes. The top gave way to great views of the city. There are walkways connecting other spires of the church. We explored them and then made our way down one of the spiral staircases - fun stuff. 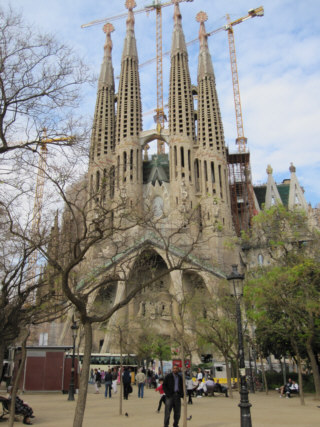 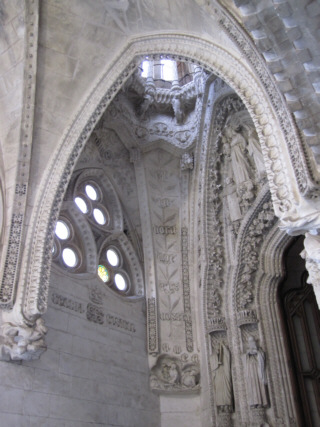 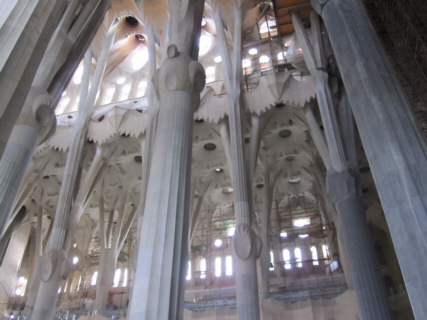 split columns inside the Sagrada Familia 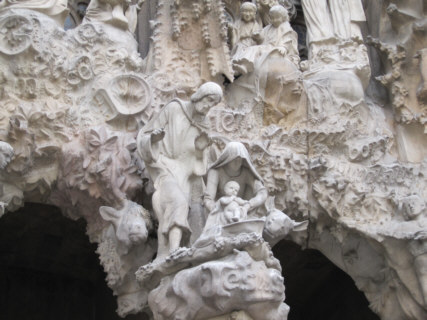 figurines of the Nativity Facade 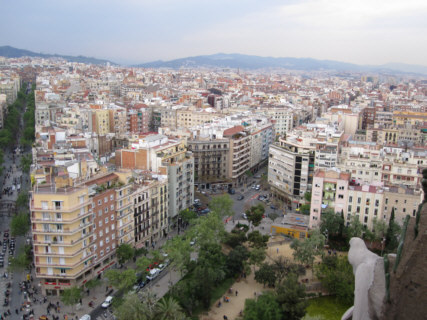 elevated view from the Sagrada Familia 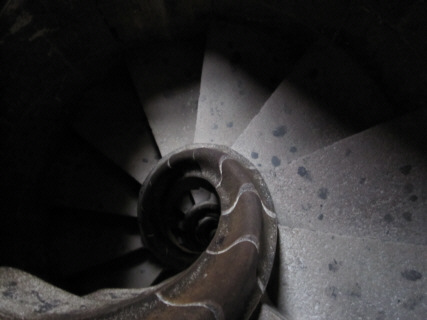 long walk down the spiral staircase

It was getting late by the time we left the Sagrada Familia. After enjoying a meal at KFC (waffle and ice cream dessert was awesome), we caught the last hop-on hop-off bus back to our hotel. It was amazing we got off at the correct stop. Traci and I were like two bobblehead dolls as we were trying to stay awake during the ride. 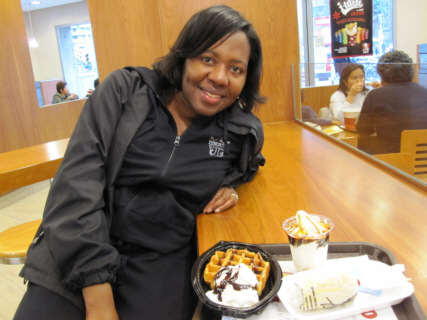 We loved the desserts at KFC!

We enjoyed our first excellent breakfast buffet the next morning at our hotel. There wasn't anything out of the ordinary on the buffet but the food seemed to be extra flavorful - especially the waffles. Our plan for the day was to take an excursion outside the city to the Montserrat Basilica. It is located halfway up the Montserrat Mountain. People make pilgrimages there to see the Black Virgin (La Moreneta). I had wanted to sign up for a half-day bus tour to the site but the front desk of our hotel informed us that the bus tours do not begin until June. We were visiting in April. As an alternative, the man at the front desk told us we could take the metro to Placa d'Espanya (a place we knew well from hauling our suitcases through there the previous day) and then take the R5 train to the last stop. This sounded simple enough so we went for it. Little did we know, this excursion would turn into an all-day event full of transportation confusion.

Our first problem began when we arrived at the Placa d'Espanya station. We had a difficult time locating the platform for the R5 train. We found it a few minutes before the train was scheduled to leave. We did not know there were several package deals available for visiting Montserrat by train. Realizing that the train was about to leave, the man at the ticket booth chose one for us and told us to hurry. Unfortunately, the train had already left by the time we made it through the turnstile. No big deal - we just had to wait an hour for the 11:36 train. Traci and I played a very competitive game of Scrabble on her iPod while we waited.

It was approximately a 90-minute train ride to Montserrat from Barcelona. As I looked at the map of stops posted inside the train, I became confused. I know the man at the front desk of our hotel told us to take the train to the last stop; however, the map indicated Montserrat was actually the fourth to the last stop. There were several Americans seated near me who were all going to Montserrat so Traci and I got off at the stop labeled "Montserrat" as did pretty much the rest of the people in our car. There are cable cars that take you up the mountain. When Traci and I showed our ticket to board the cable car, we were told we were at the wrong stop and that we needed to go to the next stop and take a train. This confused me because the next stop was called "Monistrol".

At any rate, Traci and I had to wait 45 minutes for a train to take us to Monistrol (which I later found out the full name is "Monistrol de Montserrat"). Despite the map showing two additional stops beyond this one, it was indeed the last stop of the train - just as the man at our hotel said. The Cremallera tram takes visitors up to the shrine. It makes a stop at a station about 1/3 of the way up and then continues to the basilica.

Trying to Get to Montserrat 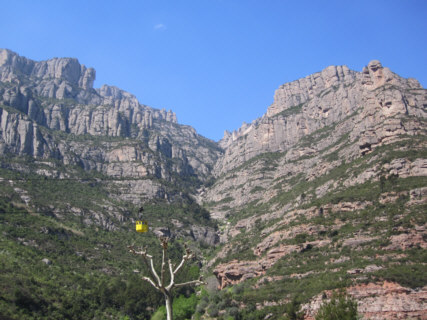 "What do you mean our ticket doesn't cover the cable car ride?" 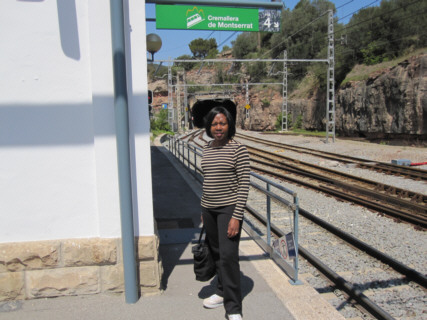 "Mike, are you sure you know where we are going?" 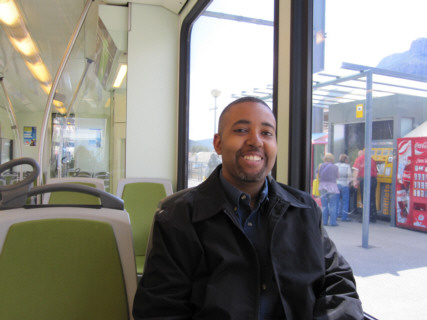 "Umm. Why are we the only ones on this tram?" 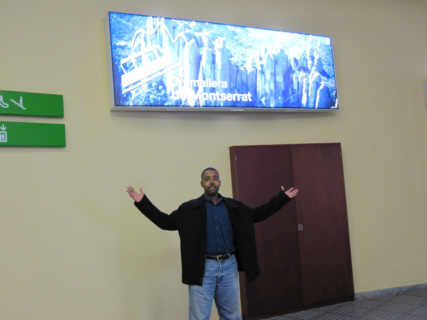 "We made it! Now let's do some sightseeing!"

It turns out, there is a complex of buildings in addition to the basilica. There is a museum, eateries, and a monastery. Traci and I headed directly to the church. The interior was dark with many religious statues and art. An organist was playing while visitors quietly walked around or prayed. There were several beautiful side chapels where people also went to meditate and pray. We went to stand in line to see the Black Virgin. It is located on a loft above the altar.

The Black Virgin is a statue of the Virgin Mary holding the Baby Jesus in her lap. It was made in the 12th century and was protected by the Benedictine monks of Montserrat during Spain's turbulent times. The statue is encased in glass but her right hand contains a sphere and is extended through an opening in the glass. As people approached the statue, they would touch the sphere and then make the sign of the cross. Traci snapped some pictures of the statue. It was not until we picked up a brochure later that we found out we were not supposed to take pictures of the Black Virgin. Oops!

There was a lot of activity that day at the church. We noticed a wedding had just finished before our visit. A boys choir from Newark, New Jersey performed two numbers while we were exploring the sanctuary. As we were leaving, I paused to watch an Italian film crew. They appeared to be making a travel show. 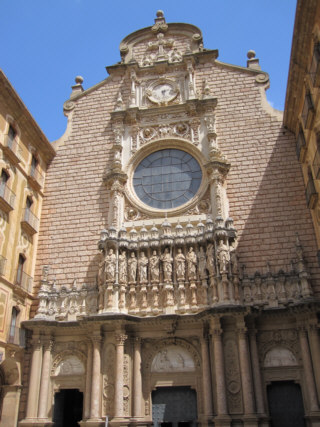 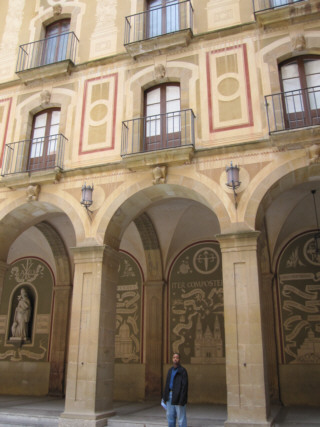 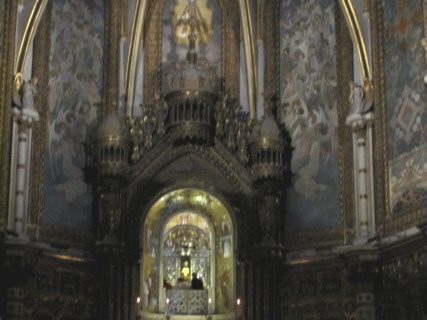 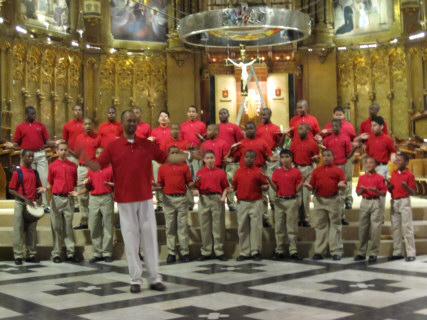 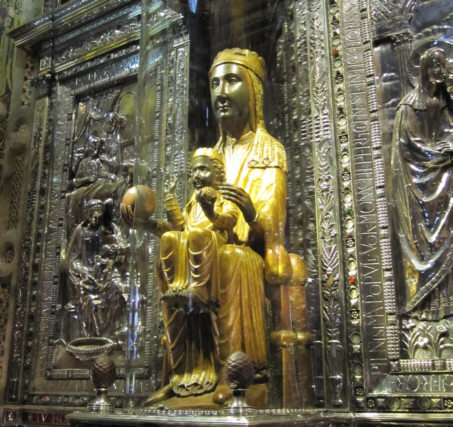