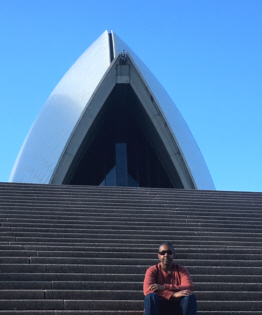 Our one-hour flight from Melbourne to Sydney was uneventful until a few minutes before landing. We were treated to a great view of the harbor, the Opera House, and the Harbour Bridge.

When we visited Sydney the first time about a week and a half prior, Traci and I followed our own itinerary. For this visit, we were following the itinerary that our travel agent at Goway Travel put together. When we arrived in Sydney last time, Traci and I took the metro to our hotel in the central business district. It took about 20 minutes. Now that we were being driven in a car, it was considerable longer due to traffic. At least we were traveling in style and we got to see different parts of the city. Best of all, we were being chauffeured in luxury.

For this visit, we were booked at the Radisson Blu hotel - so we thought. This was the only snafu of our trip. I gave the receptionist my name and confirmation number. To my surprise, I was told that our reservation had been cancelled seven months ago and that there was no more vacancy. Huh? Fortunately, Goway Travel has a local office in Sydney. I put them on the phone with the hotel receptionist while Traci and I took a seat in the lobby and checked email. About 15 minutes later, a gentleman from the reception desk told Traci and me that the issue had been resolved and that he could check us in for the 3 nights as planned.

I really liked the Radisson Blu. It is housed in a historic building but our room was modern and elegant. Additionally, we had robes, slippers, and other complimentary amenities.

We were already familiar with the area since the Radisson is located only two blocks from the Marriott where we stayed a week and a half ago. For dinner, we decided to try a restaurant in the vicinity of the Radisson. Unfortunately, we attempted to do this during the busy period 6 PM - 8 PM. Every place we visited had a very long wait to be seated. We ended up having a very nice dinner at Jamie's Italian restaurant then having dessert at Mejico. Mejico had an hour wait when we tried to get a seat earlier but now that it was after 8 PM, we were seated right away. The dessert was very good. In fact, we made a dinner reservation for the following day to avoid the long wait time we experienced that day. Continue...