A motorcoach picked us up from the Outback Pioneer Hotel to take us to our next destination - Kings Canyon Resort. It would be a 5-hour journey on an empty road through the vast desert. We saw no animals other than a rare sighting of grazing cattle. We spotted a mesa (looks like a flat-top mountain). Other than that we saw nothing but miles and miles of desert landscape. Our driver provided his wealth of knowledge of the land, the Aborigine culture, the early European culture, controversies, and more. Despite his outstanding commentary, it was not long before I was sound asleep. I was occasionally awaken when one of the annoying flies trapped on the bus landed on me.

We made a few stops along the way. We were given time to climb a sand dune and look at a dried up salt lake. It was the first time I had seen such a sight and it was impressive.

We also made a stop at a roadhouse. It is the only one for many, many miles. It was like stepping back in time. It was dusty and had old-style gas pumps. There was a counter where you could order fast food. There was fenced area containing horses.

We finally arrived at Kings Canyon resort in the early evening. Kings Canyon Resort is remote. It is so far out there that one of the guides told us that he has to make a 5-hour drive to Alice Springs when he wants to go shopping (grocery, hardware, clothing, etc…). His main challenge is to make sure he did not omit any item from his shopping list.

Kings Canyon Resort looks and feels more rustic than Ayers Rock Resort where we stayed the previous night. There were, of course, signs warning visitors to stay away from dingoes. We were also warned to keep the doors to our room closed and locked. The dingoes in the area have figured out how to get into unlocked doors. We never saw any dingoes during our stay.

Like at Ayers Rock Resort, our room at the Kings Canyon Resort was located in a one-story motel-like building. We had all the standard amenities including a super cold refrigerator. I loved that it left little ice crystals in the bottled water we stored in there. I also loved our patio which looked out over the desert landscape. I guess people stay at this resort to "get away from it all". This was our only accommodation in Australia that did not have free Wi-Fi. You could purchase it but the resort warned that the connection is unreliable. The television reception was not all that great either. We could only get a few grainy channels. 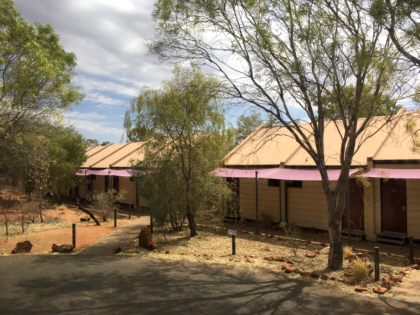 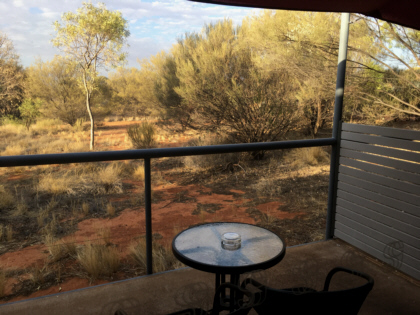 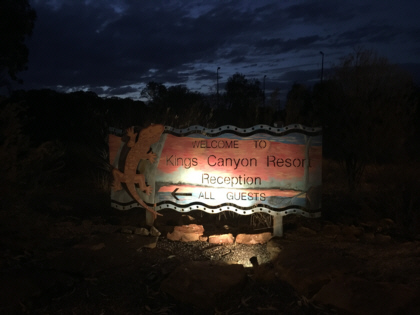 We did not spend much time in our room when we first arrived. Our bus driver had recommended that everyone walk down the path to see the sunset over Carmichaels Crag. There was a platform where guests were gathered to witness the event. The resort had also set up a little bar to sell drinks. Traci and I did not spend too much time there. Our “little buddies” the flies were out in force. Besides, we were starting to get a little tired of looking at rocks.

For such a remote place, I was surprised at the variety of food venues at the resort. There were not as many as at Ayers Rock Resort but still you could choose from bar food to a multi-course fine dining restaurant costing the U.S. equivalent of $120/person. Traci and I decided to eat at the barbeque restaurant about which our bus driver raved on the way to the resort. The place was kind of busy but I marveled at the efficiency of the two people working behind the counter. I’ve visited fast food places with many more people behind the counter that could not keep up with the rate these two were cranking out orders. What was even more amazing was how personable and comical they were with all that was going on. Traci stepped up to the cashier to place her order of grilled chicken. The cashier replied, “Chicken? Chicken? You mean to tell me you came all the way to the Outback to order chicken? You should order the kangaroo burger.” We saw kangaroo and crocodile on the menu often during our time in Australia but never ordered it. The cashier went on to tell us how tasty the kangaroo burger is. He even got the lady working the grill to back him up. However, Traci stuck to her guns and ordered the grilled chicken. As for me, I was not ready to try kangaroo or any other exotic dish unless it was on a buffet. Since I did see a few cattle during our ride to the resort, I ordered the steak. We were very pleased with our meal. It seemed we had finally gotten out of our restaurant slump. I also tried a different brand of soda called Lift. It was like a carbonated lemonade.

We got a little turned around attempting to get back to our room thanks to my sense of direction that seems to be declining over the years. It gets very dark at the resort at night. It was so dark that we needed to use Traci’s flashlight app on her phone to see where we were going. I somehow managed to lead us on the road heading into the desert. I figured we were going the wrong way when I saw a posted speed limit of 60 km/h. We turned around and stopped by the main reception building to ask for directions. All was good. It was less than a 10-minute walk to our building. We spent the rest of the night watching a Michael Buble concert on one of the grainy television channels.

Our itinerary was not slowing down any time soon. We needed to be at breakfast when the restaurant opened at 6 AM the next morning. A very nice breakfast buffet was included with our stay at Kings Canyon Resort. We had to gobble our meal down since we needed to be on the motorcoach by 6:30 AM. We were driven to Watarrka National Park where our group of 14 would do the Kings Canyon Climb excursion. Most of our group was from Melbourne, Australia. They were so friendly. We had a good time together.

The first part of this 3.5-hour hike consisted of a steep climb up a rocky path to get to the top of the canyon. We were all huffing and puffing by the time we got to the top. I took a look back and could not believe how far we had come. The bus that had driven us to the park now looked microscopic from this vantage point.

We followed our guide for the next 3 hours over mostly flat terrain around the canyon rim. We observed some dramatic views of the red, rocky canyon. There were some very steep drop-offs but not along our path. We were told to observe the cliff edges from a distance because there have been people in the past who have gotten distracted or lost their balance and ended up falling to their death. Our guide pointed out various plant life and told us how the Aborigines used them. My favorite part of the rim walk was a section where you could yell and hear your echo a few seconds later. 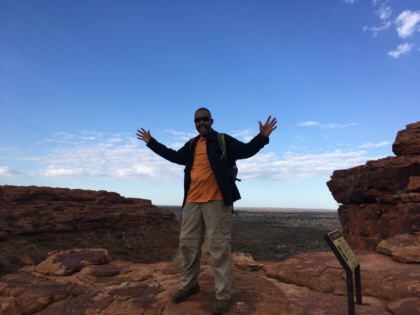 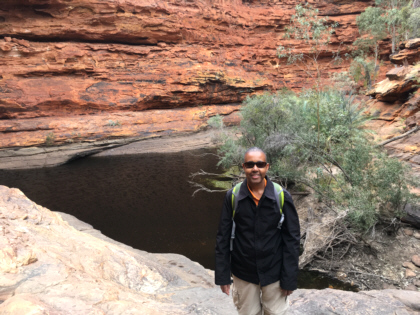 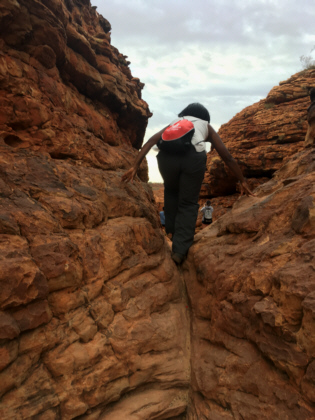 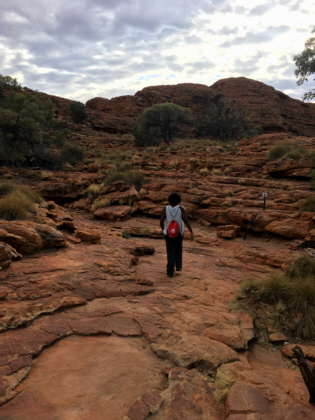 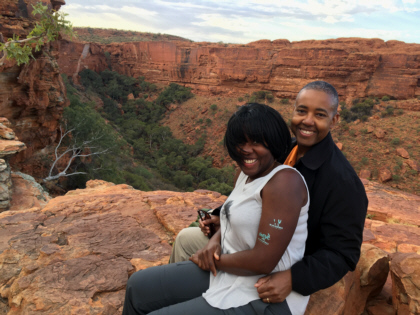 The Kings Canyon rim walk was our favorite Outback experience. However, our travel itinerary was still not slowing down any time soon. We were driven back to the resort and told that we needed to have our luggage outside our door within 30 minutes. Traci and I made it happen and by 11:45 AM, we were on the motorcoach for the journey to our next destination - Alice Springs. Continue... 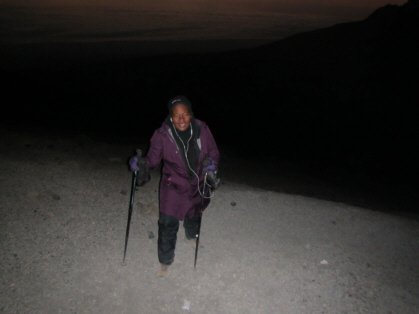 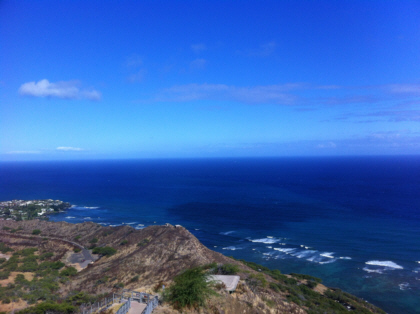