The drive from Kings Canyon to Alice Springs I'm told would normally take around 5 hours but since we would be stopping for meals and other things, our journey was expected to take close to 8 hours. We stopped at two roadhouses along the way, one of which being the same at which we stopped on our way to Kings Canyon the previous day. We stopped at the only junction I saw just as we did the day before. The tour buses pull off onto a dirt patch where the roads meet. The purpose is to shuffle passengers based on their destination - mainly Ayers Rock, Kings Canyon, or Alice Springs. Traci and I did not need to change buses since ours was going to Alice Springs.

Our bus driver provided excellent narration of our journey but also gave us plenty of downtime to take a nap. There were two times when he told us we were about to cross a bridge. The strange thing about this was that because of the drought, both rivers had completely dried up. I had never seen anything like this before.

We had a pleasant treat during our journey - two wildlife sightings. One was a kangaroo that hopped across the road. The other was a lone wild camel standing in the distance. Camels were brought to Australia from Middle East and India from the late 19th century through the early 20th century to help the Europeans explore and settle in the Outback. The camels were no longer needed after the construction of the railroad, the telegraph network, and the use of automobiles in the 1930's. Therefore, the camels were set free. They can thrive in the Outback but they can be very destructive to the native flora.

We finally reached Alice Springs around 8 PM. It is the largest city in the Outback. It is home to approximately 25,000 people. There is a U.S./Australian military base there as well. Even though we were still in the Outback, Alice Springs looks nothing like the desert we had seen during the last two days. It looked rather suburban. Our driver dropped off passengers at the various hotels throughout the city before eventually dropping Traci and me along with a German couple at the hotel our travel agent booked for us - the Aurora Alice Springs. We said goodbye to our driver. He was a really nice guy. We had had good conversation over lunch at one of the roadhouses earlier that day.

After a delicious dinner at the hotel's Red Ochre Grill, Traci and I dragged ourselves back to our room. It had been a long day. Unfortunately, out of the seven hotels at which we stayed during our two weeks in Australia, the Aurora Alice Springs was our least favorite. It is a motel that could probably benefit from some updating. This was the only hotel during our trip that did not provide wash clothes. Furthermore, it was a cold night. The heat did not circulate throughout the room very well. There was only one thin sheet on the bed. I found two neatly folded blankets in the closet; however, when I unfolded them to put on the bed, I noticed that they were faded and stained. Yuck! Needless to say, we did not use the blankets. Instead, we just layered up and snuggled under the thin sheet. Thankfully, we were only there for one night.

Traci was up early the next morning to go for a run. I went to the Red Ochre Grill for the breakfast buffet. Sad to say, the quality of their breakfast was nowhere near as good as their dinner. One thing I found interesting about this buffet, however, was that it contained spaghetti. I know that some countries consider food such as baked beans as breakfast food but this was the first time I saw spaghetti on a breakfast buffet.

Back in our room, I enjoyed watching one of the channels that showed Aboriginal programming. Some of the programs looked like amateur video at various celebrations with traditional body paint and dancing while other programs were professionally produced. There were several hip hop videos that seemed to have positive messages such as 'stay in school', 'don't drink and drive', 'stop the violence', etc... I found this channel captivating since it is very rare that I ever hear anything about Aboriginal culture at home in the U.S.. By contrast, some of the commercials in Australia would begin with a warning that the commercial contains 'culturally sensitive material'.

The one major advantage of the Aurora Alice Springs Hotel is its location. It is located on the pedestrian-only shopping section of the city. Our transfer to the airport was not scheduled to pick us up until 10:15 AM. Therefore, Traci and I walked across the street to take a stroll through the Todd Mall until then. 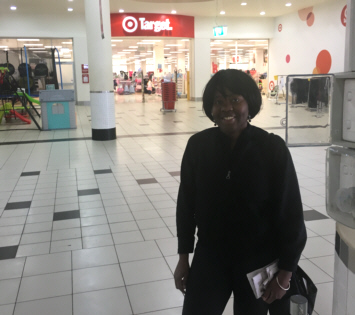 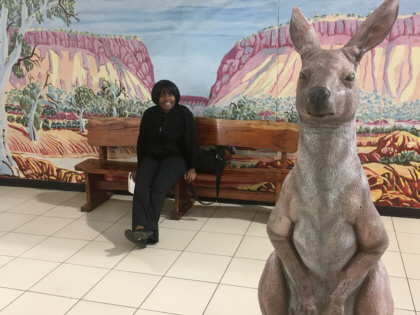 Our travel agent had booked a private transfer for our ride to the Alice Spring Airport. We were picked up by a friendly lady in an SUV. I was a little concerned that our pick-up time was at 10:15 for our 11:45 flight. I found that there was no need to worry. We were pretty close to the airport. We managed to check our bags and make it through security before 11 AM. Boarding time for our flight was 11:20 AM. Traci and I ended up being the last passengers to board the flight because there was a delay in the preparation of Traci's take-away personal pizza at one of the airport eateries. The flight attendants at the boarding gate were so friendly, I told them about Traci's predicament. They not only assured me we were not endanger of missing the flight but they went to the pizza counter to help expedite Traci's order. A few minutes later I saw Traci and the flight attendant walking towards me chatting, laughing, and having a good time. With that, we boarded our flight and said goodbye to the Outback. Continue to Cairns... 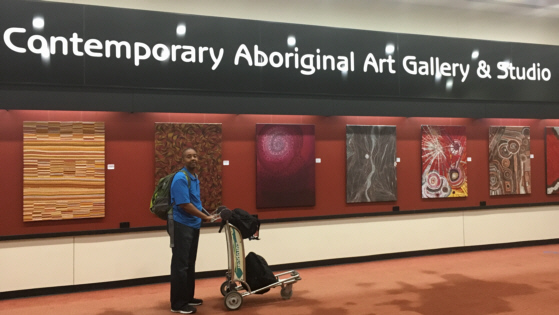 checking out the Aboriginal art in the airport 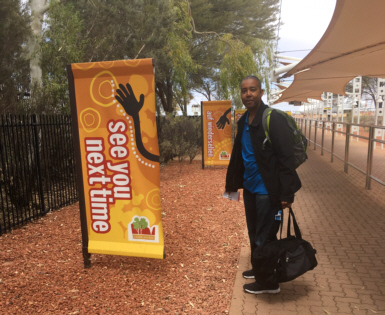 walking to the tarmac to board our flight. Bye bye, Outback.