As planned, we were picked up from our hotel at 7:20 AM and taken to Federation Square where we waited with other tourists for the 8:20 AM City Tour of Melbourne. This was a 4-hour bus/walking tour of the city. While the tour was pleasant and informative, there was nothing that wowed me. I think if someone had blind-folded me and dropped me off there, I might have thought I was in the business district of one of the cities on the east coast of the U.S. – except traffic flowed on the opposite side of the street. We saw concert venues, sports arenas, the train station, Chinatown, and many tall buildings. We were driven through some historic districts where it is mandated that the houses must maintain an exterior similar to the 1800's appearance. We were given some time to walk a through the pretty Fitzroy Gardens which seemed to serve as a peaceful respite from the hustle and bustle of the city. A guide took us on a walking tour which included historic alleys, arcades (covered alleys), and tea rooms. Today, the alleys and arcades consist of mainly eateries filled with business people. 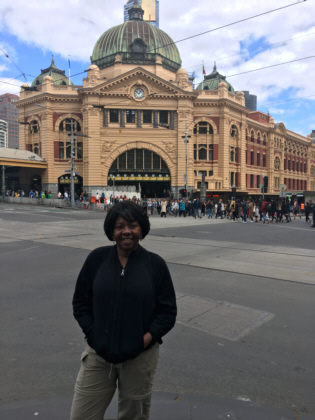 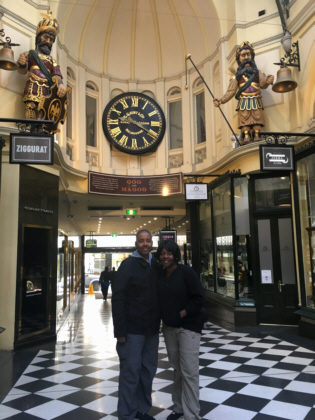 mythical figures Gog and Magog watch over the Royal Arcade 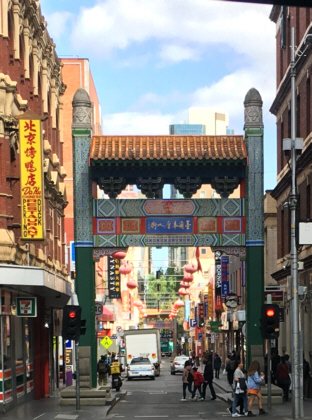 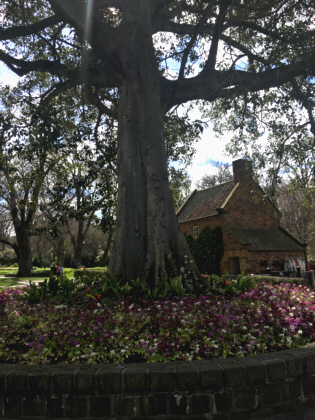 We were given some time to walk around the exterior of the Melbourne Cricket Ground stadium. It was a venue for the 1956 Olympics. It is used today for professional cricket matches and for AFL (Australia Football League) games. The media was starting to set up there to cover a huge AFL final that would take place in two days. The whole city was abuzz in anticipation of this big game. Traci and I actually had the opportunity to peek inside the stadium thanks to a nice guard who said we could enter as long as we did not wander too far from his section. We took a look at the field and looked around one of the sports apparel shops.

We were dropped off back at Federation Square at the conclusion of the morning tour. Traci and I had about an hour and a half to kill before our afternoon/evening tour. We used the time to walk around the area. Although the streets seemed to be filled with business people, we did come across a few souvenir shops. In fact, we bought a refrigerator magnet for our collection. This one was a reversible Australia continent magnet containing pictures of some of the places we visited. It seemed like a cool idea at the time but when I got home, I realized I could only display one side of the magnet on my whiteboard; otherwise, the continent is backwards.

Now that we were seeing Melbourne during the day, I was surprised by how close our hotel was to all we had seen on the tour and what we were seeing during our free time. Goway Travel had done a good job at choosing convenient lodging throughout this trip.

Traci and I made our way back to Federation Square for our excursion to Phillip Island for the Penguin Parade. The Penguin Parade is a daily event in which hundreds of penguins come ashore in the evening to make their way back to their burrows. We were on a double-decker bus for this trip. Our driver gave excellent commentary along the way but I was asleep not long after the bus started moving. 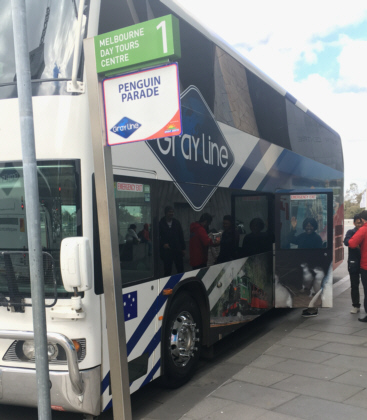 We made two stops on our way to Phillip Island. The first was a farm on Churchill Island. The views of the green fields and the ocean in the background were gorgeous. While at the farm, we could look at the farm animals, attend demonstrations, or get something to eat at the cafe. There was a whip demonstration, a sheep dog demonstration, and a sheep shearing demonstration. Traci and I attended the latter two. The sheep dog demo did not go as planned. The owner could barely keep the dog's attention. He ignored her most of the time and just took off running after the sheep.

The sheep shearing demonstration was interesting. The shearer showed us how fast he could shave the wool off a sheep's body. More than anything, I got a kick out of the shearer's very thick Australian accent. Even though he was speaking English, I had to concentrate like mad to understand him. 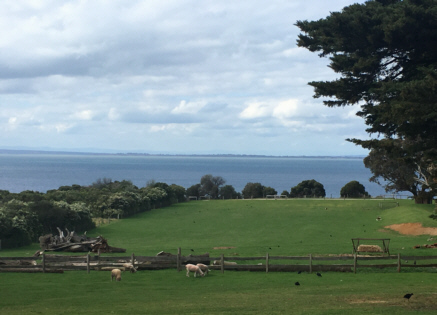 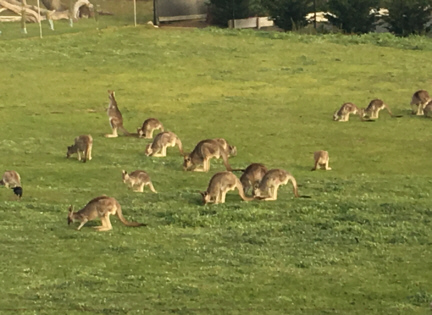 From the farm, we were driven on a road through more beautiful scenery to get to our second stop - the Koala Conservation Centre. We walked along a network of boardwalks while looking up at the trees hoping to spot a koala. It was always exciting when we found them. Traci and I also took some time to walk along a loop path through the woods. It was here that we spotted a wallaby foraging just off the path. When I looked closer, I noticed that she had a joey in her pouch. This mama wallaby seemed to be protecting her baby from photos. Every time Traci lifted her phone to get a picture of the joey poking its head out of the pouch, the mama would turn her back to us. 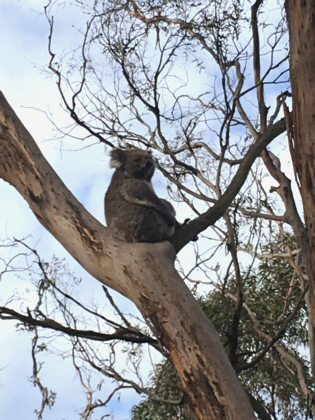 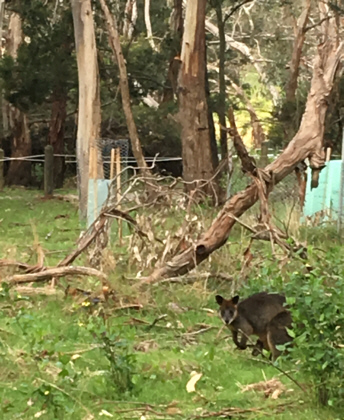 wallaby with a joey in her pouch

We finally reached the site of the Penguin Parade around 5 PM which was about an hour before it gets dark at this time of the year. We had a surprisingly good meal at the cafeteria in visitor center. By the time we finished eating, it was getting dark and everyone was headed to the beach to wait for the penguins. There is a boardwalk leading to the beach and other observation areas. There are bleachers on the beach. It was miserably cold and very windy that evening. Traci and I did not sit on the bleachers. Instead, we paced the boardwalk trying to stay warm. Eventually, we began to spot penguins. You are not allowed to photograph them. We were told that the flash damages their eyes. At one point, I asked a security guard something. I don't remember what but that is not important. What impressed me was how passionate this man was about the penguins. He took Traci and me to his favorite section of the boardwalk for viewing the penguins. He told us all types of facts about the birds as well as about his experiences observing them. This species of penguin is called little penguins. As you probably guessed, they are the smallest species of penguins. The security guard excitedly took us to another area where we saw the little critters traversing the beach by the dozens. They were pretty comical to watch. They would waddle awkwardly along. They would occasionally trip and fall on their belly. They would simply get up and continue on in search of their burrow and/or mate. We could hear the other penguins calling from the hills. By this time, Traci had had enough of the cold and told me she would wait for me back at the visitor center. I continued chatting with the security guard for a while and watching the penguins before finally heading back to the warmth of the visitor center. The enthusiasm of the security guard made the Penguin Parade Excursion an enjoyable experience. 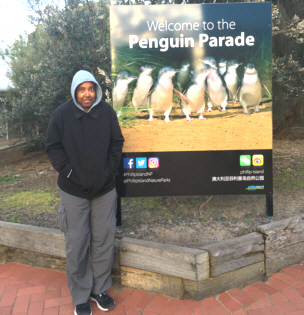 Man was it cold and windy that day! 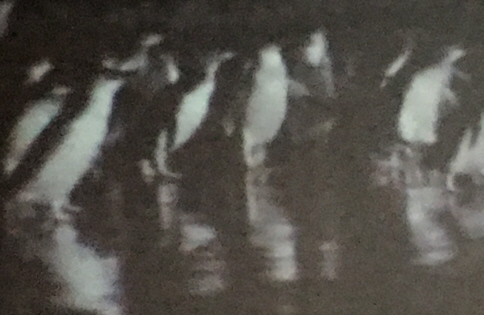 It was almost a 2-hour ride back to Melbourne. I regret not having my camera out as we approached the city. It is so pretty when it is all lit up at night.

The next day was a transfer day. We had some time before our pickup. It seems the thing that Traci remembered from our city tour the previous day was the location of a jogging path. As has been the case for several mornings during this trip, Traci went for a jog while I went to get breakfast. This time I walked to the 7-11 at the corner to get a breakfast sandwich and came back to the room. I ate the sandwich and one of the Krispy Kreme doughnuts we bought when we first arrived in Melbourne. 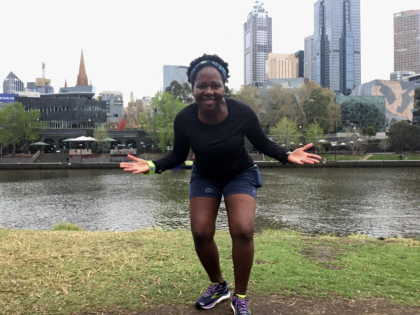 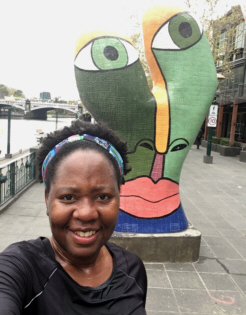 We checked out of the Travelodge Southbank Hotel and met our driver who was waiting in the lobby. Wow! This well-dressed driver greeted us politely and led us to his luxury class Mercedes-Benz. Nice! We felt like VIPs as we were driven to the airport for our one-hour flight to Sydney. Continue to Sydney (Package)...