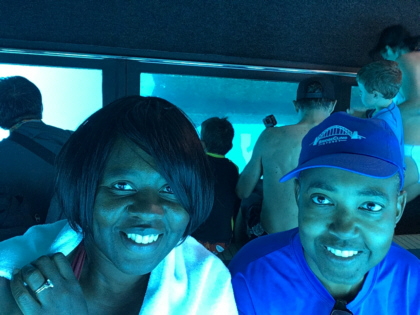 It was a 2.5-hour flight on Qantas from Alice Springs to Cairns (pronounce Cans) in Australia’s tropical north. By the way, we had now entered our third Australian state – Queensland. We found our driver who was holding a sign with our names on it. As we were led outside the airport, I was so captivated by the contrast to our arrival in the Outback. In Cairns, there were palm trees and lush green mountains. The temperature was warm enough to where we no longer needed our jackets. It kind of reminded me of arriving on an Hawaiian island. I was excited to see what lies ahead.

We were led to a van to join 4 other passengers. During our ride into town, I marveled at the laid back vibe similar to a beach town. The driver dropped off passengers at the various hotels before eventually arriving at the hotel where Traci and I would be staying for the next three nights – the Pacific Hotel Cairns. The Pacific Cairns, is a very nice high rise hotel located at an end of the main tourist drag – the Esplanade. I went through my ritual of getting us checked in, finding out the Wi-Fi password, and having the hotel reception call the various tour companies listed on our itinerary to confirm the pick-up details.

Traci and I had a room on the 8th floor (Room 820). As soon as the elevator door opened at the 8th floor, I was hit with a clean scent that had a hint of pool chlorine. It was something about this mix of aromas that invoked childhood memories of arriving at a hotel for our annual beach vacation with my parents, siblings, cousins, and other family members. It still amazes me how many people could fit in my father’s station wagon back in the day.

I liked how clean and neat the hotel was whether it was the hallway, lobby, or our room. Although the hotel had a modern décor, the hallways had photos and posted information about the history of the area. From our 8th floor balcony we could see the Esplanade, the marina, the casino, and other establishments. Cairns really made a nice first impression on Traci and me. We quickly transformed ourselves from travelers to vacationers. We changed into our shorts and headed out to enjoy the sunshine.

View from Our Balcony at the Pacific Hotel Cairns 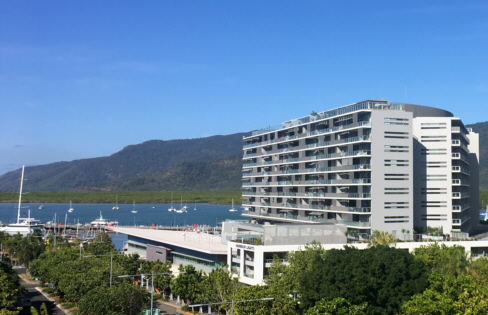 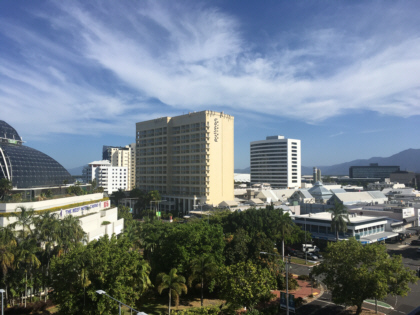 Our hotel was located across the street from the ocean. There is not a recreational beach. It is more like a mud flat where you can see some interesting sea birds such as pelicans. In lieu of a beach, there is a large man-made lagoon in which people were swimming or lounging around. Traci and I walked the promenade and boardwalk that runs along the shoreline. There were people walking, jogging, cycling, and exercising. It was such a lovely day. As we walked, I was intrigued by the haunting sounds I heard coming from the large trees. They sounded like a cross between an owl and a mourning dove. I never did see what creatures were making that sound.

Traci and I walked for about two miles at which point we were no longer walking along the shore but past beautiful ocean view properties. Since we were getting hungry, we decided to turn around and head up the Esplanade in the direction of our hotel. The number of restaurants on the Esplanade is overwhelming. There is cuisine from all around the world. I was relieved that we did not read too many posted menus before making a choice of where we wanted to eat. We chose a seafood restaurant call Splash Seafood. It, like several other restaurants, had reduced prices before 6 PM. Traci and I were early enough to take advantage of this. The other advantage of arriving this early is that you are seated and served right away. This might not be the case between 6 and 8 PM when places fill up with hungry tourists.

After a very nice dinner at Splash Seafood, we continued our stroll up the Esplanade and along some of the parallel streets. We discovered that there are even more restaurants on these parallel streets stretching for blocks beyond the Esplanade. Since it was after 6 PM, it was now dark and the eating establishments were full of diners. Many places had outdoor dining. The best part about this is that there were almost none of “our little buddies” the flies that bothered us during our time in the Outback.

In addition to restaurants, there are souvenir shops, pubs full of sports fans, street performers, convenience stores, grocery stores, tour booking agencies, and much more. We flowed in and out of the various places until we decided it was time for dessert. We stopped in a place called Outback Jacks where we shared their delicious Nan's Apple Pie. After leaving there, we stopped by one of the many gelato stands on the Esplanade to get gelatos.

Traci and I did not stay out too late during our time in Australia. We were normally back in our hotel room between 9 and 10 PM. We enjoyed checking out some Australian TV programs - game shows, reality shows, movies, etc... We occasionally watched the news. The major Australian news stories at the time were the search for whoever was hiding needles in strawberries and the shark attacks occurring near the Australia's Whitsunday Islands. Continue...