Relieved that our photo ordeal was behind us, we continued on to our final scheduled destination of the tour – the Mercato. The Mercato is a huge open-air market that not only expands blocks but square miles! Everything from livestock to electronics is sold there. We were told that there would not be much activity or people there during our visit because it was Sunday. Upon arriving in the Mercato vicinity, it became obvious to me that there was a difference between my idea of a crowd and our guide’s idea of crowd. To me, the place was packed. Our driver drove slowly through the crowd. Sometimes he would back up in order to turn the van around. I was always afraid that we were going to hit one or several of the pedestrians. We were just centimeters away from them on all sides of the van. If we were to drive that close to a pedestrian in the U.S., the person would probably be ready to fight or at least have some unpleasant words for the driver. But this is not the case in Ethiopia. They seem to take it all in stride. 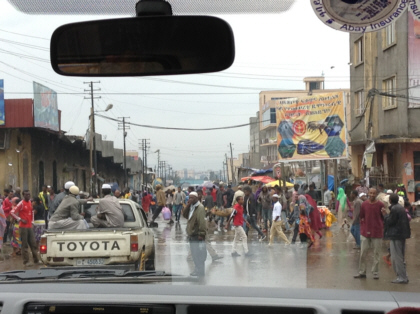 riding through the crowded Mercato 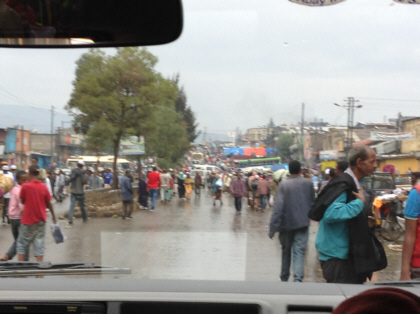 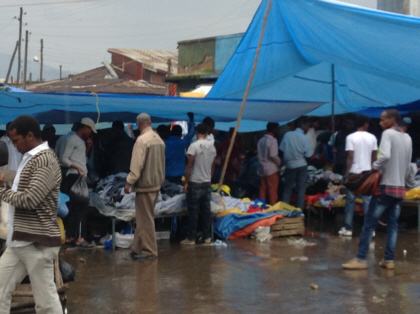 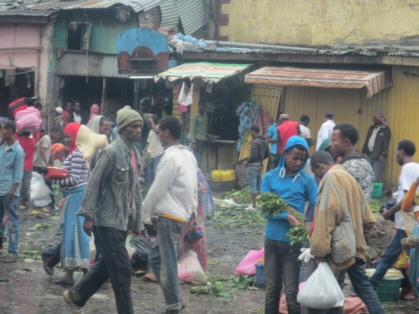 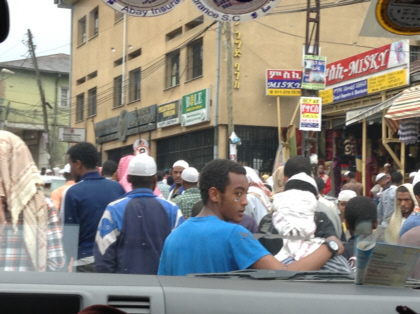 We rode through the area for a little while. Our guide pointed out vendors with piles of khat. Khat is a leaf that is chewed. It is a type of stimulate that purportedly gives the user a buzz. Eventually, we left the area and headed back to the hotel. On the way, we made a stop at a small shop that our guide said sells the best coffee. Ethiopian coffee is world-renown. Neither Traci nor I are coffee drinkers, but when one of my co-workers found out we were going to Ethiopia, he asked me to bring him back coffee beans. I was able to purchase some at this shop.

A Fun Night Out

When booking the Ethiopia leg of our journey, I assumed we would not have enough time to do a full-day Addis Ababa tour and still catch a flight home. Had I realized that the daily flight from Addis Ababa to Washington departs at 11 PM, I would have booked only one night in Ethiopia. Instead, I booked two nights. Now that our city tour was over, what were we going to do the rest of the evening and all day the next day until our 11 PM flight home? I sought the advice of our guide. He said that Ethiopian Quadrants offers a full-day tour to the countryside. I was a little worried because our cash was running low. Our guide said not to worry. He said that I could use my credit card as payment at the end of the tour the next day.

In the meantime, it was around 5 PM when we arrived back at our hotel after our city tour. Our driver offered to swing back at 7:30 that evening to take us out for an authentic Ethiopian meal and traditional Ethiopian music. This sounded like a great opportunity to experience some culture so we accepted his offer.

We were picked up promptly at 7:30 and driven through the crowded dimly-lit streets of Addis. It seemed the streets were more crowded with people than cars. We eventually turned down a dark narrow street which made Traci and me nervous about our surroundings. But soon, we saw the neon lights of the restaurant called the Ethiopian Cultural Ambassador. We encountered some drama before we got out of the van. Our driver got into an argument with a police officer over a parking space. Even as our driver parked his van and was letting Traci and me out. He and the policeman were still exchanging words. Traci and I were starting to second-guess our decision to dine out. Our driver assured us that everything was okay and led us to the restaurant.

Similar to other places we visited in Addis, there was a security check to enter the restaurant. Once inside, our driver informed us that he had called ahead and reserved us a good table. Indeed, we had a nice table near the stage.

Dining in Ethiopia is quite different from what we are used to in the U.S.. Food is served on a spongy sour bread called injera. You tear off a piece of the injera and use it to pick up your food. There are no eating utensils. You eat with your right hand only. Eating with your left hand is considered bad table manners. You and your tablemates normally eat off the same dish.

We were given a menu which was written in Amharic and English. Most of the offerings were either lamb or beef. I knew Traci is not crazy about either one of those meats so our driver and I scoured the menu until we found the one chicken meal. The meats are normally cooked in a spicy sauce and served with a boiled egg. Before we dug in, a waiter came along with soap and warm water that he poured over our hands for cleaning.

The chicken meal tasted fine to me but Traci did not care for it. Our driver and I ate most of it. However, our driver wanted us to experience a variety of Ethiopian food so he ordered a dish that had all types of meats with sauce, beans, vegetables, powders and a boiled egg. There was even a pile of raw meat that our driver cautioned us not to eat. However, he seemed to be enjoying it. He enthusiastically encouraged us to try the various foods. He told us their Ethiopian names. In most cases, I had no idea what I was eating. Nevertheless, I tried several of the spicy meats and enjoyed most of them. I tried the cabbage and string beans but they were served cold so I left those alone. Traci nibbled at the food but it just was not her cup of tea. 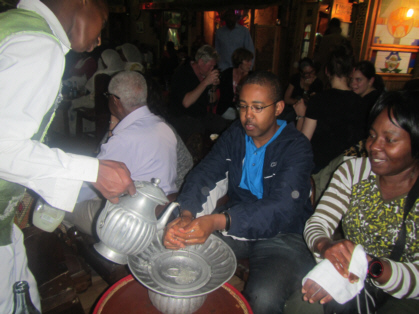 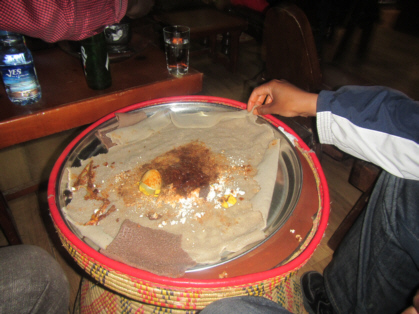 tearing off a piece of injera to pick up my food 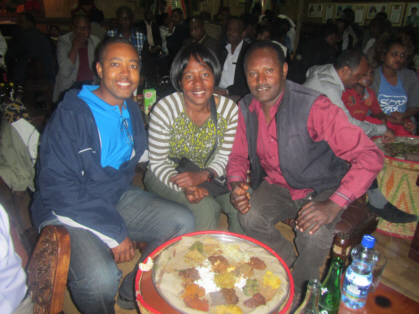 There was constant live entertainment on the stage at the restaurant. As I mentioned earlier, Ethiopia is comprised of more than 80 ethnic groups, each with their own language, customs, and music. The entertainers at the restaurant performed music and dance representative of many of these groups. Even though I did not understand the language, I really enjoyed the performances. The performers changed costumes many times throughout the evening. Their dances involved a lot of shoulder and head shaking. The performers were accompanied by four instrumentalists who were playing a flute-like instrument, drums, and string instruments I had not seen before. At times, the music reminded me of Bollywood music from India. Other times, it sounded kind of Irish. Often the music sounded like nothing I'd heard before. One of the highlights of the evening was a man who started on the stage but walked around the room giving an energetic speech. Our driver explained to me that the man was like a hype man who was giving a speech of pride. The man had the crowd so hyped up that people began stuffing money in his turban. As the speech increased in intensity, so did the music and chants that the rest of the performers were doing until the whole thing climaxed with the man dancing wildly on the stage while audience members put money in front of him. It was exciting. 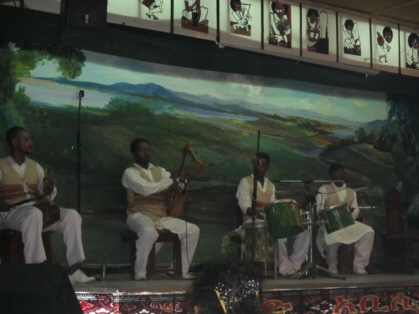 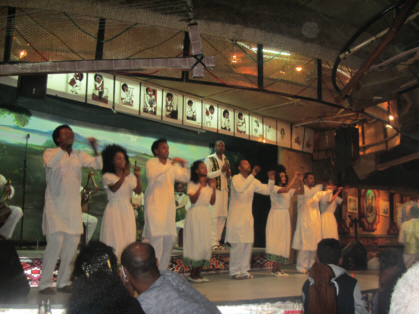 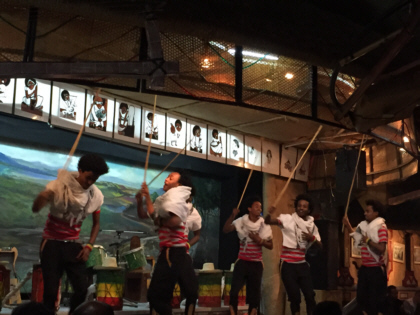 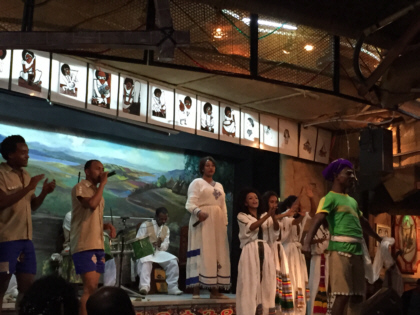 We left the restaurant around 10 PM. We thanked our driver for showing us a good time. It had been my favorite evening of my entire 2.5 weeks in Africa. Our driver said he would meet us in the lobby of our hotel at 8:30 the next morning to take us on our excursion to the countryside. Sadly, we would not see him again because his father passed away that night. Continue...