Traci and I spent a few days in Marseille (pronounced Mar-say) - France's second largest city. This port city is the nation's oldest. Marseille has its share of big city problems; however, there are enough interesting attractions, friendly people, and good'ol Mediterranean sunshine to make a few days here an exciting experience. A daytrip to the town of Avignon gave us of a glimpse of fairy tale-like beauty as we spent time on the famous bridge and toured the medieval Popes' Palace.

Traci found herself in the South of France for business. Not wanting to miss out on an opportunity to explore another part of the world, we made plans for me to fly over after the business portion of Traci's trip was finished and the two of us would spend the rest of the week sightseeing. Traci left me in charge of planning the vacation portion of the trip. I chose the city of Marseille as our base. I knew cruise ships stop there for Mediterranean cruise itineraries so I figured there had to be some interesting things for a tourist to see.

It was quite a long journey to get to Marseille. I had a 6.5-hour United Airlines flight from Washington Dulles Airport to Brussels, Belgium. After a 2-hour layover, I had a 2-hour flight to Marseille. The flights were uneventful; however, I was freezing on the first leg of the journey. It seemed like the air condition was on max for most of the flight to Brussels.

I was looking forward to this France trip because it would be an opportunity for me to put my eight years of adult education French classes to use. I had just finished my annual class the week prior. I was starting to build confidence with the language as I realized I could understand much of what was being said during the in-flight announcements without having to rely on the English version that immediately followed. This confidence was short-lived when I decided to try to strike up a conversation with the man sitting next to me on the flight between Brussels and Marseille. It was at that point that I realized the people in this region of France speak much faster than any French I'd heard in class or during any formal announcements. I was lost by his second sentence. Needless to say, our conversation did not last very long. Feeling embarrassed, I did not try to converse the rest of the flight.

To my surprise, the man was waiting for me after I retrieved my luggage from baggage claim. As we walked, he told me about some of the tourist attractions in and around Marseille. It took every bit of concentration for me to understand his rapid pace of speaking. He offered to show me where to catch the bus from the airport to downtown. I thanked him but declined since I needed to wait at the airport until Traci got off from work. With that, he wished me a "Bon séjour." (Pleasant stay) and continued on his way. His kindness was typical of the people we'd meet during our stay in Southern France. Everyone was friendly and willing to help. They often finished their helpful advice with a smile and a reassuring pat on my shoulder.

The Marseille airport is relatively small. I had done my research online before this trip and determined the easiest place for Traci and me to find each other would be at Hall 1 Arrivals. My flight arrived at 11:30 AM (5:30 AM East Coast U.S.). I knew it would be a while before I met Traci. Her meeting was not scheduled to end until 1 PM and her company's office was at least a 30-minute ride from the airport. To kill some time, I got a bite to eat at one of the eateries in the airport and then settled in for some people-watching. French culture was immediately apparent as I watched people greet each other with a kiss on both cheeks. This greeting was not only between men and women but it was also man-to-man and woman-to-woman.

As the clock approached 3 PM and I had not seen Traci, I began to worry my rendezvous instructions were not accurate enough. I worried she was wandering around the airport looking for me. She had no way of contacting me since my mobile phone did not work outside the U.S.. Knowing that Traci's iPhone works internationally, I decided to pay 0.15 euros/minute to use one of the airport internet kiosks to send Traci a text message indicating my exact location. No sooner than I had finished inserting two euros into the slot, I looked up and saw Traci walking toward me. Her meeting had run long that day and she had just been dropped off at the airport.

Since I had already inserted money to use the internet, I decided I'd send an email to my family to let them know I had arrived in France safely and that Traci and I had found each other. I never did get to send the email from the terminal because the keyboard was different from what I'm used to. For one, my Yahoo username contains an underscore. By the time I figured out the only way to get to the underscore on this keyboard was to turn on Caps Lock and hold down the Ctrl key, my internet time had run out. We finally sent an email later that day from the hotel using Traci's laptop.

Now that Traci and I were together, it was time to figure out how to get to our hotel in downtown Marseille. My research before the trip indicated we could take the airport shuttle bus (le navette) to Saint Charles Station (Gare Saint Charles) and then take the metro (subway) to the La Joliette stop. The airport shuttles run every 20 minutes and costs 8.50 euros/person (approximately $12/person) one way. It takes about 20 minutes to reach St. Charles Station.

As we approached the city, I can't say Marseille looked like much of a vacation destination on the surface. There were old high rise apartment buildings with laundry hanging over the balconies, graffiti everywhere, traffic jams, road rage arguments, broken glass, dog poop on the sidewalks, etc.. The guide books warned of some of these scenes but they also pointed out some interesting sights to see in the city. I kept an open mind as we arrived at St. Charles.

St. Charles Station is the city's major transportation hub. From here, you can take the metro, the bus, a taxi, regional trains, or international trains. It was a bit intimidating for Traci and me as we entered the busy station and tried to get oriented. Add to this all the French signage and public announcements. Fortunately, the public announcements at St. Charles are immediately followed by English. I really enjoyed the little tune that played just before a PA. It sounded like a synthesized voice doing a funky jazz scat. I found myself occasionally humming the riff throughout my stay in France. Despite the English version of the announcements, it did not take long for us to realize that not many people speak English in Marseille. This was in contrast to our Paris trip back in 2003 when we were surprised to learn that most people we met were fluent in English in addition to their native language. Therefore, during this Marseille trip, I got more practice speaking French and translating for Traci than I had ever expected I would. Overall, I was pleased with my performance but I had my share of "deer in the headlights" moments in which the onslaught of French words came at me so fast I froze. 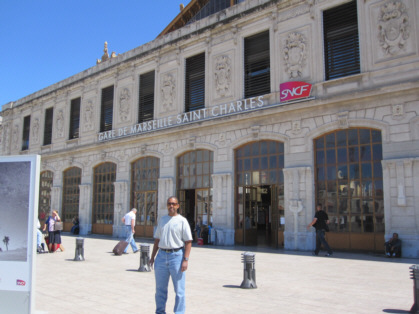 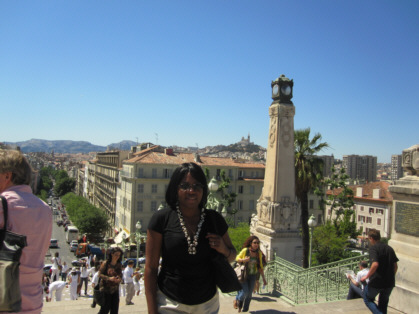 on the steps of Saint Charles Station

Our first order of business at St. Charles Station was to find the tourism office so that I could pick up our 2-day Marseille City Pass. This pass costs 29 euros (approx. $40) per person and gives visitors to the city free public transportation (bus, metro, and tramway), free tours, free admission to all the city's museums, and free tastings, as well as discounts to restaurants, stores, and certain tours. I had ordered the passes online before our trip and I needed to redeem my voucher. I found the tourism office in the station but I was sent to the general ticket office where I was given a city map and told I needed to redeem my voucher at a different tourism office located at the Old Port (Vieux Port).

We decided we'd first make our way to our hotel (Best Western La Joliette) to drop off our luggage and then set out to find the correct tourism office. We took the metro two stops to La Joliette. We emerged from the metro station to find we were at the intersection of five streets and none of them seemed to have the street name for which we were searching. It was technology to the rescue when Traci pulled up Google Maps on her iPhone and led us a half block to the hotel.

We only had two weeks to plan this trip to Marseille. As a result, we were not able to find a hotel in the tourist district that had vacancy for our entire stay. We had originally booked a hotel for Wednesday night, a different one for Thursday night, and another for Friday and Saturday night. A few days before Traci was scheduled to fly to France, we did a hotel search and found out the Best Western La Joliette had a room become available for Wednesday and Thursday night. This was preferable to changing hotels each day so we booked it.

Our room at the Best Western La Joliette was small. The bathroom was not much bigger than the bathroom of an inside cabin of a cruise ship. Like many European hotels in which we've stayed, there were no wash cloths but at least this hotel provided exfoliating soap. Despite the size, the room was designed well enough to be functional. It had a refrigerator, a wardrobe, and safe. The flat-screen television was mounted on the wall. All the channels were French except for CNN and the BBC. The bed was very comfortable. The staff spoke English well. They were very friendly and helpful. After 9 PM, we had to rely on them to let us in the hotel. This safety measure was appreciated until the night we arrive at 10 PM and had to wait on the dark street for several minutes for someone to unlock the door.

The bathroom is behind the doors

The room was small but maximized space. 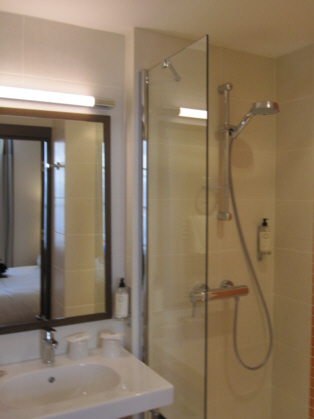 We did not purchase the hotel's "American Breakfast". It was offered for the equivalence of $21/person each morning. It was not much more than a continental breakfast so we passed. Instead, we took advantage of the businesses in walking distance from the hotel such as a corner grocery store, a pastry shop, and even McDonalds at the Old Port. This kept the breakfast total for both of us under $10.

After checking into our hotel we set out to go to the Old Port and find the tourism office. The Old Port is the main tourist area of Marseille. We had several options for getting there from the Best Western. We could walk there in 10 to 15 minutes. If we did not want to walk, we could take the tramway which stopped one block over from the hotel or we could take the metro which is a half block from the hotel. We found walking to be quicker than waiting for the tramway or waiting for the two metros required to get to the Old Port. continue...